8AM TRADITIONAL SERVICE
10AM CONTEMP. SERVICE
Articles » The Gift Received 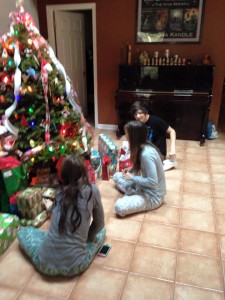 We all have a set of traditions at Christmas, and changing those traditions is never easy even when it’s for good reason. You see until this year, I have always attended Christmas Eve service; I’ve never attended a Christmas Day service, not as a child, not as a young adult, not even as a chaplain. Rarely had our Christmas morning as a family been interrupted by anything other than family desiring a visit.

When I was a chaplain, we would rotate the holidays so that no one person had to work each and every one. To be honest, I had offered to handle the Christmas Day service as a chance to give Father Carl and Father Christopher time with their families. As I was viewing it, it was an obligation that I could take off of their plate. As usual, they had much to teach me!


As I arrived at the church, Father Carl, Father Christopher and Christopher’s wife Marci were cleaning up the luminaries from the night before. As we completed the task, I realized that not only Marci but all of their children were present as well. We joked about being the only ones who would probably show up, and the children shared with me their new found treasures that they had dug out of stockings.

About ten minutes before the service, the parking lot began to fill up. Almost thirty hearty souls had ventured out Christmas morning to worship the Lord, one man even dressed as Santa Claus. The liturgy, even despite faux pas of my own, seemed light and engaging as the congregation picked hymns amongst themselves and filled in the gaps.

We prayed that the joy and peace promised by the Lord would filter throughout the congregation, spread far and wide despite the difficulties and stresses that the holidays can generate, and that the true spirit of Christmas would prevail. That’s when it hit me: this service was not an obligation. In fact either Father Carl or Christopher would have been more adroit at handling it, but it was an opportunity to be blessed, by participating in the service, by hearing Levi Buffington read Isaiah, and by the Caudle children sharing with me the excitement of Christmas thus far. The peace of that service did not dissipate all day. Our gift giving was just as joy and laughter filled despite the delay. Somehow the service set the tone for the rest of the day for me.

By now, the gifts have all been opened, and we are left wondering, “What is next?” If you are a child, you are actively trying to see how your toys work. If you are an adult, you are probably beginning to think about how you will put everything away. Either way, you may be asking yourself, “How will I best use this gift received?” Spiritually, it should be the same. We have received God in the flesh, Emmanuel. St. John begins his Gospel by outlining just how important a gift we have received.

Join me this Sunday as we explore the Word become flesh.