8AM TRADITIONAL SERVICE
10AM CONTEMP. SERVICE
Articles » WHAT DO THEY HAVE IN COMMON?

WHAT DO THEY HAVE IN COMMON?

What do All Saints' Sunday, the Baptisms of Three Bravo Siblings and the Upcoming Presidential Election Have in Common?

Sounds like the start of a corny joke, doesn't it? Few people would argue about the positive effects the saints' lives have had on our eternal progress as Christians. The same holds true with the baptisms. We at least cognitively grasp that the decision to follow Christ and the subsequent submersion in water of each of the Bravo children constitutes a rebirth into the family of all believers.

What then can the election have in common with such religiously-charged events?  All three events are quite serious, and all three events might feel as if they hold life and death in the balance. How does that make you feel?  Do you thoughts of the election make you anxious?  What if I was to tell you that it is going to be okay?  Would you believe me, or would you need to know which way I lean politically before you could answer?

My daughter Devyn had a teacher who challenge her students to "step out of their story for a minute..." She meant that they needed to take a moment to examine what misperceptions or falsehoods might be influencing their actions or decisions. I think this may be one of those moments when this advice needs to be heard. God willing, our story is finding a place in THE story, HIS story, but we need to be extremely careful that it is HIS story that colors ours and not the other way around.

We seem to revel in God's sovereignty when it suits us. When we agree with what is happening in a situation, we might say to someone else, "Well, you better get on board, because this is in God's will." Notice that this presumes a position of power.  The translation is: I am firmly in God's will. You need to be, too. Make the correction.

As we often express it, His sovereignty revolves around our need to be right or in control. Make no mistake about it, this distorted way of expressing God's rule can be described as a form of self-interest or selfishness. Want to see a historical example of it? Read the portions of the Gospel where the religious establishment of Jesus' day chose defend what they self-deludingly believed to be right rather than embrace the living Word of God. 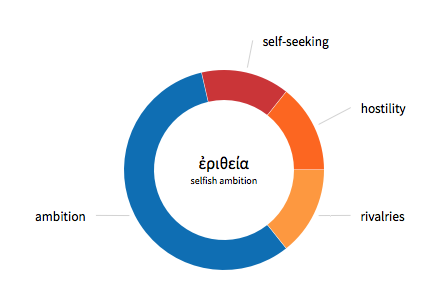 I once heard Dr. Steve Harper, then Vice President and Director of the Orlando Campus, preach from the Beatitudes on a Greek word not even found in the text, εριφεια (eritheia). He insisted that the root of all evil is arguably self-interest, selfishness, or self-ambition.

The word, from the works of Aristotle, is not found in the scriptures until the New Testament. In every occurrence, it is used to describe a behavior or attitude to avoid.

but for those who are self-seeking and do not obey the truth, but obey unrighteousness, there will be wrath and fury.

Do nothing from selfish ambition or conceit, but in humility count others more significant than yourselves.

The word eritheia speaks of self-ambition, hints of political intrigue and decries hostility and strife. But Dr. Harper looked at it from the little things, the times it was easier, more convenient or simply safer to protect one's own self-interests. Doesn't the world tell us, "If you don't look out for yourself, no one else will?" How much of what we think is important for the Kingdom is generated by our own wants and desires as opposed to His request?

I know many have heard me say that I am one of the world's best at self-delusion. What I have not normally shared is that I am not alone. Self- delusion is not a Clint problem, it is a human problem. It is so easy for any one of us to delude ourselves into thinking that something is worthy and right despite the facts set before us. Now, if we are trained by the world to look out for our own interests, and we have confirmed the ability to delude ourselves, is it such a stretch to think that some of our desires politically may have more to do with our desire to reclaim what we have lost, a way of life?

There is no pointing of fingers and no secret plan to sway you to the right or the left, just an attempt to see the problems more clearly. But then again, why believe me when I tell you that I do not have an agenda? It seems nearly impossible to engage in public debate today. The facts are growing ever more complicated and, despite the overabundance of information, verification of the truth is nearly impossible. So what are we to do?

Join me Sunday as we look at the story of past saints, baptize some new ones and confirm our role as God's remnant.