8AM TRADITIONAL SERVICE
10AM CONTEMP. SERVICE
Articles » The Great 50 Days of Easter Day- 10

Almighty Father, you have given your only Son to die for our sins and to rise again for our justification: grant us so to put away the leaven of malice and wickedness that we may always serve you in pureness of living and truth; through the merits of your Son Jesus Christ our Lord, who is alive and reigns with you, in the unity of the Holy Spirit, one God, now and forever.

Archbishop Temple says that “Christianity is not only a system of moral teaching, it is fundamentally a gift of power.” Resurrection power inhabits the world as it has been, and shows by its presence that all things must be remade. This resurrection power is both for us and for others. Where do you sense your need for the gift of power? What situation or person in your life drains you of your own strength? Pray that God will infuse you with the same Spirit that raised Jesus from the dead, and witness new life spring forth. 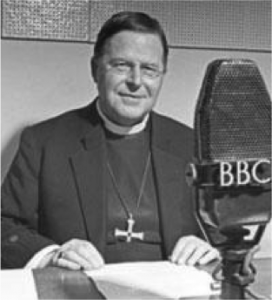 Archbishop William Temple led the Anglican church through World War 2 and is known as one of its leading modern theologians. His commitment to the practical aspects of Christ’s rule among the church and nations distinguished his primacy. The following extended excerpt is from a sermon delivered after the conclusion of World War One, as the nation and church considered what it would take to move forward in peace and blessing.

“It is not chiefly moral principles that are lacking; what the world needs to-day is power to live by the principles which are professed. Such wise comments on the situation of the world as I have described really amount to this: If all men were unselfish instead of selfish the evils of the world would disappear. But how is that transformation to be accomplished? Many at least of the world's worst evils are the result, not of appalling and outrageous wickedness, but of the fact that the majority of men and women are as good as we are and not better. Take some -millions of people just like us, all generous with their superfluities but still putting self first, and in a few generations you will again have rich and poor living side by side, each ignorant of the lives the others lead ; you will again have slums, and sweating, and casual labor, and the denial to many of the educational facilities that are needed to develop the powers which God gives His children. There are great criminals in the world ; but even if all men reach the existing average of moral attainment, the worst evils will still continue. The real trouble of the world is that most of us are just average people. How are we to rise above that average? Society may by various forms of pressure raise men and women to the level of its own conventions. But that leaves the problem still unsolved. If I am selfish, not grossly but yet predominently selfish, what shall make me unselfish? For it is certain that my own selfish will can never do it. If my will is selfish, it does not desire to be unselfish ; there is the trouble. A man can never by his own strength put away the sin of his own soul. There is much that he can do. He can curb rebellious impulses and brace a will that is only slack. But what most needs to be done he cannot do. In proportion as he is sincere he will exclaim with S. Paul: "wretched man that I am, who shall deliver me from the body of this death ?"

Christianity is not only a system of moral teaching, it is fundamentally a gift of power. And this power is not only the encouragement given by the promise of attainment in the future; it is the certainty that comes from a victory already achieved. There we take our stand. We have indeed the promise of Christ, and it is a wonderful treasure. But we have also His accomplishment, and that is something of incomparably greater worth. Remember how He prayed to His Father and said, "I glorified Thee on the earth, by accomplishing the work that Thou gavest me to do"; and how just before He had said to His disciples, "In the world ye have tribulation ; be of good cheer ; I have overcome the world/'

Christianity is the religion of a victory achieved. The Christian is indeed marked by a specially acute sorrow for his sin, for he knows the wounds that it inflicts on his Divine Saviour. But the Christian is never frightened of his sin. He does not cower under its weight before a Divine Judge whose sentence he fears. For he knows that his Judge is first his Saviour ; the sin he loathes is essentially a dead thing already, for Christ has killed it, and as soon as he resists it in the power of Christ, he finds that it gives way before him. He grieves for it, but lifts his sorrowing gaze in unabated confidence to the Captain of his Salvation. He knows where to find the strength he needs ; and his sorrow when he falls is never near despair. It fortifies my soul to know That, though I perish, Truth is so ; That, howsoe'er I stray or range, Whate'er I do, Thou dost not change ; I steadier step when I recall That, if I slip, Thou dost not fall. Our first need, alike in personal and in public perplexities, is assurance assurance of direction and assurance of power. It must not be self-reliant ; there is in ourselves no strength or wisdom worthy of reliance. Our assurance alike of direction and of power must be the gift of God, known and acknowledged as such. It is vain to hope for the Kingdom of God if God Himself is ignored or disobeyed or defied. In Him and only in Him is salvation from wars and the causes of wars, from social unrest and civil strife, as also from personal sins or failures.

… If only each one could be brought to realize that love till his heart went out in answering love, and could then be brought to realize that the same love divine works and waits and suffers for every soul of man, all hatred and bitterness would vanish from the earth. How can I hate or despise another man, even though he be my own or my country's deadliest enemy, if I realise first that Jesus Christ my God died on the Cross for me, and then remember also that He died quite equally for the man whom I am tempted to hate or to despise ? If we love God, we cannot be indifferent to those whom He loves. In His eternal love and our answering love is the healing for the whole world's wounds. Some day men will turn their eyes to the Cross of the Risen Christ, to the ascended throne of the crucified, to find in Him their King as well as their Saviour. In His triumphant sacrifice all history finds its pivot and all hope its fulfilment. While we neglect what He has wrought, all our politics and diplomacies can only shift but never remove the world's load of evil. There, and there alone, shall we find the sure foundation on which the ideal civilisation can rest.

And we know that later, if not sooner, “the ends of the world shall remember themselves and be turned unto the Lord: and all the kindreds of the nations shall worship before him."

Then will be fulfilled the promise of the angels' song, and the glory of God in the highest heaven will have its counterpart in true and lasting peace among men of goodwill on earth. That peace cannot be shaken and that glory cannot pass away.

"For I am persuaded, that neither death, nor life, nor angels, nor principalities, nor things present, nor things to come, nor powers, nor height, nor depth, nor any other creature, shall be able to separate us from the love of God, which is in Christ Jesus our Lord.”