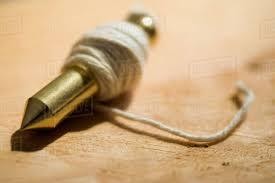 The prophet Amos is shown a string in our passage for Sunday. More exactly, a plumb line.

God shows him this instrument used by skilled builders; held above and weighted below.

There is much more to the prophet Amos and the book that collects his ministry-long span of messages and visions. You can see a brief overview of the book here that may help put his message in context.
Posted in Friday Epistles

I remember a conversation between my
Posted in Friday Epistles

What do you do with the fifth goat?

Between the Services Sunday:
Posted in Friday Epistles

Good Friday
The Service for Good Friday leads us through the last hours of our Lord Jesus' life on the day we commemorate his holy death. Beginning with Isaiah's prophecy of the suffering servant through Hebrews' description of the New Covenant, we finally listen to John's narration of Christ's trial and then rise to witness him cruelly crucified at Golgotha.
Posted in Friday Epistles, Good Friday

I said Alleluia on Sunday. It was accidental, but loud.
Posted in Friday Epistles, Lent

The gospel of Jesus has been reaching across countries, cultures and conversations since his first announcement that God's kingdom was here. In his words and deeds; in his person and mission.

"God saw that the light was good..." Genesis 1.4a
Posted in Friday Epistles, General
« Previous Entries Next Entries »