8AM TRADITIONAL SERVICE
10AM CONTEMP. SERVICE
Articles » The Great 50 Days of Easter Day- 13

Almighty Father, you have given your only Son to die for our sins and to rise again for our justification: grant us so to put away the leaven of malice and wickedness that we may always serve you in pureness of living and truth; through the merits of your Son Jesus Christ our Lord, who is alive and reigns with you, in the unity of the Holy Spirit, one God, now and forever.

St. Athanasius writes “It is, indeed, in accordance with the nature of the invisible God that He should be known through His works.” Where do you see evidence of the Resurrection in your life? In the life of your small group and parish? What do these evidences tell you about the invisible God? 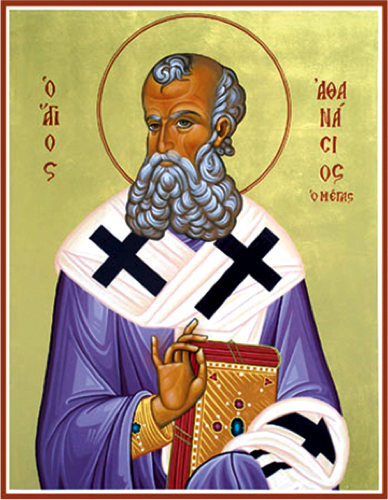 Athanasius was a 4th century bishop who staunchly defended the fundamental Christian declaration that Jesus’ true humanity and divinity are essential for him to be a true Savior. The excerpt below from his classic text On the Incarnation elaborates one implication of the resurrection; that is, the ongoing influence of Jesus. Athanasius argues that while dead people don’t get much work done, Jesus is still powerfully at work in the world. You can read the entire work here. http://www.ccel.org/ccel/athanasius/incarnation.pdf

(30) …How could the destruction of death have been manifested at all, had not the Lord's body been raised? But if anyone finds even this insufficient, let him find proof of what has been said in present facts. Dead men cannot take effective action; their power of influence on others lasts only till the grave. Deeds and actions that energize others belong only to the living. Well, then, look at the facts in this case. The Savior is working mightily among men, every day He is invisibly persuading numbers of people all over the world, both within and beyond the Greek-speaking world, to accept His faith and be obedient to His teaching. Can anyone, in face of this, still doubt that He has risen and lives, or rather that He is Himself the Life? Does a dead man prick the consciences of men, so that they throw all the traditions of their fathers to the winds and bow down before the teaching of Christ? If He is no longer active in the world, as He must needs be if He is dead, how is it that He makes the living to cease from their activities, the adulterer from his adultery, the murderer from murdering, the unjust from avarice, while the profane and godless man becomes religious? If He did not rise, but is still dead, how is it that He routs and persecutes and overthrows the false gods, whom unbelievers think to be alive, and the evil spirits whom they worship? For where Christ is named, idolatry is destroyed and the fraud of evil spirits is exposed; indeed, no such spirit can endure that Name, but takes to flight on sound of it. This is the work of One Who lives, not of one dead; and, more than that, it is the work of God. It would be absurd to say that the evil spirits whom He drives out and the idols which He destroys are alive, but that He Who drives out and destroys, and Whom they themselves acknowledge to be Son of God, is dead.