8AM TRADITIONAL SERVICE
10AM CONTEMP. SERVICE
Articles » The Great 50 Days of Easter Day- 23

Almighty God, whose Son Jesus Christ is the resurrection and the life: raise us, who trust in him, from the death of sin to the life of righteousness, that we may seek those things which are above, where he reigns with you in the unity of the Holy Spirit, one God, now and forever.

Father Carl writes that “God showed me that they were his. He knew them by name and they were His.” These words apply to others and to you. When have you been reminded that God’s love for someone else is great? When have you felt God’s great love for you? 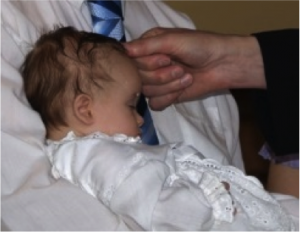 "I saw the crosses!"

The speaker finished his talk and invited us to come to the altar rail for prayer.  I was first out of the blocks.  Sincerely convicted of my being judgmental of my parishioners, I desperately needed relief. “If the speaker will just pray for me," I thought, but another came.  Alas, I told him my issue and strangely he said, "I know."  Not at all sure how efficacious this would be, the last thing I recall was his hands on my eyes.

When I opened them again I was stretched out on the cathedral's chapel's stone floor, somehow separated from sandals.  Not something I am prone to do.  The only person in the room was the one who prayed for me and the parishioner I had dragged along to this renewal conference.

Later that week a parishioner stopped in my office and shared about how judgmental she had been lately.  I said, stealing from my prayer minister, "I know. Listen to this teaching," handing her the cassette tape from the conference, "and get back to me."  The next morning she was waiting for me, and she said there was nothing about being judgmental in the talk.

"Hmmm, you've got to be kidding, I was convicted from head to toe by that talk," I responded.  Later, I listened and sure enough she was right, no mention of being judgmental. I learned then that when God has something to say, he doesn't need a speaker.

Sunday morning came on schedule, and what happened was a bit unnerving.  When I began to share the thoughts of my sermon and looked out on the congregation, I could see a slight, light, iridescent glow on their foreheads.  After rubbing my eyes, trying not to be too distracted, and keeping hold on my sanity, I noticed they were in the shaped of crosses.  What I believe I saw was their chrismed baptismal crosses!  "You are now sealed with the Holy Spirit in baptism and marked as Christ's own forever," and the priest anoints with oil the sign of the cross.

I saw the crosses!

Do you think that helped me with being judgmental?  God showed me that they were his. He knew them by name and they were His -- remember Sunday's gospel from John 10.  We are resurrection people believe it or not!

Sadly for me, it faded all too fast, lasting only a few weeks, and just on Sundays.  But I learned a lot, not just about my being judgmental but about the Holy Spirit and how he speaks and works through prayer ministry.  The presence of God in worship is indeed transforming. listen to the sermon Sunday about his presence in our worship.