8AM TRADITIONAL SERVICE
10AM CONTEMP. SERVICE
Articles » The Great 50 Days of Easter Day- 26

Almighty God, whose Son Jesus Christ is the resurrection and the life: raise us, who trust in him, from the death of sin to the life of righteousness, that we may seek those things which are above, where he reigns with you in the unity of the Holy Spirit, one God, now and forever.

Gerard Manley Hopkins was a 19th century English poet-priest whose interest in drawing out the inner reality of events and objects, or inscape as he coined the term, has inspired many later readers and writers. In this poem, he recounts the giving of communion to a local soldier for the first time. In what ways have you experienced Holy Communion as strength for the battle, or the rations for your service? 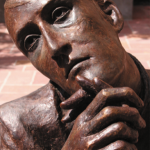 A buglar boy from barrack (it is over the hill
There)—boy bugler, born, he tells me, of Irish
Mother to an English sire (he
Shares their best gifts surely, fall how things will),

This very very day came down to us after a boon he on
My late being there begged of me, overflowing
Boon in my bestowing,
Came, I say, this day to it—to a First Communion.

Here he knelt then ín regimental red.
Forth Christ from cupboard fetched, how fain I of feet
To his youngster take his treat!
Low-latched in leaf-light housel his too huge godhead.

There! and your sweetest sendings, ah divine,
By it, heavens, befall him! as a heart Christ’s darling, dauntless;
Tongue true, vaunt- and tauntless;
Breathing bloom of a chastity in mansex fine.

Frowning and forefending angel-warder
Squander the hell-rook ranks sally to molest him;
March, kind comrade, abreast him;
Dress his days to a dexterous and starlight order.

How it dóes my heart good, visiting at that bleak hill,
When limber liquid youth, that to all I teach
Yields tender as a pushed peach,
Hies headstrong to its wellbeing of a self-wise self-will!

Then though I should tread tufts of consolation
Dáys áfter, só I in a sort deserve to
And do serve God to serve to
Just such slips of soldiery Christ’s royal ration.

Nothing élse is like it, no, not all so strains
Us: fresh youth fretted in a bloomfall all portending
That sweet’s sweeter ending;
Realm both Christ is heir to and thére réigns.

O now well work that sealing sacred ointment!
O for now charms, arms, what bans off bad
And locks love ever in a lad!
Let mé though see no more of him, and not disappointment

Those sweet hopes quell whose least me quickenings lift,
In scarlet or somewhere of some day seeing
That brow and bead of being,
An our day’s God’s own Galahad. Though this child’s drift

Seems by a divíne doom chánnelled, nor do I cry
Disaster there; but may he not rankle and roam
In backwheels though bound home?—
That left to the Lord of the Eucharist, I here lie by;

Recorded only, I have put my lips on pleas
Would brandle adamantine heaven with ride and jar, did
Prayer go disregarded:
Forward-like, but however, and like favourable heaven heard these.