Years ago, in the early 70's, Dean Builter, a good friend and neighbor from Junior high through college, held up his right hand right in front of my face.  One finger wouldn't stand up like the others.  He said, "I stuck up my hand up to signal my platoon to advance, and a bullet went straight through it, right there," as he pointed to the wound.

It was his ticket home from the Vietnam War.  A number of our friends didn't come home. 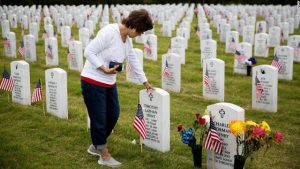 It is good, and quite overwhelming; to remember and give thanks for those who gave their lives for our country.  (I have included a paragraph on Memorial Day, and a numeric list of those killed in combat in the top 10 wars we have been involved in.)

A couple times a year I get to travel to other countries and it's on those visits that I often realize just how blessed we are.  For example, written on my visa to The Republic of India it says, "Not valid for missionary work."

A greater loss than that of a life, is the loss of a soul. Jesus had some things to say about this:

n  What good will it be for a man if he gains the whole world, yet forfeits his soul? Or what can a man give in exchange for his soul? Matt. 16:26

In Jesus' prayer for us in Sunday's gospel reading he prays that our souls will be protected:

n  I will remain in the world no longer, but they are still in the world, and I am coming to you. Holy Father, protect them by the power of your name-the name you gave me-so that they may be one as we are one.John 17:11

n  My prayer is not that you take them out of the world but that you protect them from the evil one.John 17:15

Like it or not, believe it or not, there is a fierce war going on both externally and internally for our souls:

n  Dear friends, I urge you, as aliens and strangers in the world, to abstain from sinful desires, which war against your soul. 1Pet. 2:11

One of the fastest growing religions today is that of Secularism.  Bishop C. Fitzsimons Allison has written about this in his book, TRUTH IN AN AGE OF ARROGANCE.  But basically the religion of Secularism says; believe what you like, whatever works for you, all roads lead to heaven.  It can be far more subtle than that at diminishing the truths of the Christian Faith.  But as the author of the BENEDICT OPTION, Rod Dreher, points out and calls it -- "a mushy pseudoreligion the researchers have deemed, Moralistic Therapeutic Deism," --  is hollowing out the faith of many of our churches.

So here's my quandary.  How do I pray for my grandchildren and their children after them?  How do we pray in such a way that saving faith is passed on?  That they will be protected?

One piece of the answer I believe is to let Him pray.

n  Who is he that condemns? Christ Jesus, who died-more than that, who was raised to life-is at the right hand of God and is also interceding for us.Rom. 8:34

n  Therefore he is able to save completely those who come to God through him, because he always lives to intercede for them.Heb. 7:25

Someone shared of simply praying Jesus' prayer in John 17 until it became their own and just how transforming that was. 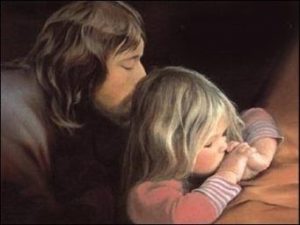 We can let him pray in two ways:  One is to embrace the truth that he is praying for you, your children, and your children's children; and two, is to let His prayer come alive inside you.  After all, that is where the battle is waged.

And what's more! The Holy Spirit is at work in prayer as well.

n  In the same way, the Spirit helps us in our weakness. We do not know what we ought to pray for, but the Spirit himself intercedes for us with groans that words cannot express. Rom. 8:26

Let Him pray, and let us pray!  Amen.

Memorial Day is a federal holiday in the United States for remembering the people who died while serving in the country's armed forces. The holiday, which is currently observed every year on the last Monday of May, originated as Decoration Day after the American Civil War in 1868, when the Grand Army of the Republic, an organization of Union veterans founded in Decatur, Illinois, established it as a time for the nation to decorate the graves of the Union war dead with flowers. By the 20th century, competing Union and Confederate holiday traditions, celebrated on different days, had merged, and Memorial Day eventually extended to honor all Americans who died while in the military service. It marks the start of the unofficial summer vacation season, while Labor Day marks its end.