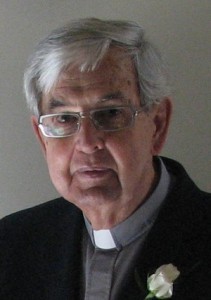 "My dad, whose life you all have come here tonight to celebrate, and in some way must have touched your lives, was just an ordinary guy. Like you and me. And he would say that if he was here. He just pushed ahead with whatever God gave him or put in front of him. He was bold like that."

Sounded to me a bit like bold Bartimaeus in Sunday's gospel reading. “I want to see!”

I remembered how we'd be going along just fine in a staff meeting and Chuck would just start singing, "Be bold, be strong, for the Lord your God is with you!" And again, and again ‘til we were all on board.

"My dad was strong, too. Even when he was sick, he was still a strong person. I always felt secure and safe when he was alive. I'm going to miss that."

Kelly Irish shared in the same ordinary way his dad used to, so much so I was pushing back tears. The same flat and level presentation, with the same rare inflection. The Christian humorist, author and speaker, Jamie Buckingham once said of Chuck when following him at a podium, "His soft spoken words were so powerful that if he even thought of pounding the podium the roof would have caved and the sky fallen."

Early into Kelly's words I noticed something happening in me and in the room where the 500 or so of us were gathered, most sitting. It was potent, ordinary on the one hand, and as strong as the tornado of Kelly's words on the other.

I scanned the crowd. Still as night now. All facing front. No one even fidgeting. Some familiar faces, some children and grandchildren of former friends and colleagues. They, too, seemed captivated by something far greater than what was obvious.

It was something like what happened in church last Sunday - that blessed stillness when you know Aslan is on the move.

What was it? What was happening to me?  And more, who put this magic into this ordinary air?

Maybe it was the overflow of the body of Christ gathered to celebrate together. The body of Christ re-membered and remembering. Was it the presence of the Kingdom come on earth as in heaven? Could be.

Or maybe, as I perused the people, was it their now vulnerable love that was combusting with the Holy Spirit's fire and was filling the space with his presence?

Kelly had just been sharing about how his dad cared for his mom in her last days battling MS, how he saw him even risking his own health to care for her. And as my gaze returned to my friends, Dave and Judy, I knew love was a big player in this precious moment. He continues to love her more and more as Alzheimer's continues to keep her at a distance.

Then it hit me, maybe it was the perfect storm I was sensing? The liturgy was no doubt playing a part, too! I sometimes forget just how powerful it is. The prayers prayed by saints in ages past are loosed and joined with the hearts of those who have come before him now, the communion of saints!

The veil was thin, maybe split in two. God’s hand touching souls and bodies. I know this is a strange thought, but I had it so I'll share it. I wondered if Chuck and Jesus hadn't colluded with the Holy Spirit, and had decided to loose some of Chuck's gifts to us unsuspecting worshipers.  I say that because I felt a new boldness and strength flowing in me.

What was it? Anointed words, the body re-membered, love being manifest, the power of the liturgy and communion of saints, the impartation of gifts or all of the above?

On the way out, Dave shared a story about being on a ministry team with Chuck in New Zealand where Chuck had become ill and had to stay over. Dave rearranged his travel to stay with him. When they finally parted and were walking in opposite directions, Chuck, a man of few words, called out, "Hey Dave!" Dave turned and saw Chuck standing there with a two thumbs up. He'll never forget that.

My turn now. "Do you recall the time he went up to a woman he'd never met at a social and just said, ‘You want to know Jesus, don't you?' And she just burst into tears saying, 'Oh yes...'"

Just an ordinary lady with an ordinary man.  Someone said, "Evangelism is just one beggar telling another beggar where to find bread."

Back to the beggar Bartimaeus – “Son of David have mercy on me.”

I wondered if that ordinary lady, Chuck had introduced to Jesus, might have been there that night. Maybe she sweetened the ambiance and swirled the air?

Yes, just an ordinary guy with an extraordinary God!

Thank you Lord for Chuck, a follower on the way.