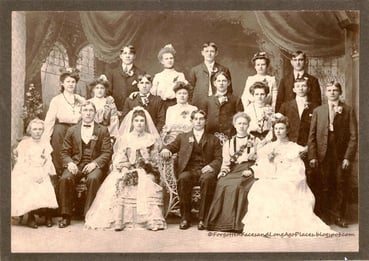 Wedding photographers have an amazing task. They document both actions and feelings of a day in which multiple people with multiple tasks move around one another simultaneously with a single goal in mind.

Careful planning surely attends the planning of the photographer’s task list, as the images that every future bride and groom have seen in a movie’s happy ending or a bridal magazine are catalogued and sequenced.

The photographer has their own list in mind, knowing from experience the things that couples often miss in their preparation but will surely want in their album.

The picture above is from the early 1900s, and the names of those pictured apparently lost to history. A caption on the reverse says in Polish “I was 16 years old” but the writer’s face on the front is unknown. The couple looks young and intentional, and are seated surrounded by family and friends. This image documents a day that will live with them, and beyond them forever.

Many bible scholars believe John wrote his Gospel in the last quarter of the first century. Jesus ministry began around 30 AD, so the Cana couple who posed for a picture on that wedding day recorded in John chapter 2 would have been celebrating their 50th (or 60th) anniversary when this first sign of Christ’s identity was published.

Maybe if we had their wedding album, we would catch a glimpse of Jesus or his friends on the sidelines. Maybe we could see his Mother standing with him in the casual snapshots of the crowd at the reception.

Or, without seeing him directly, we might just see the rosy glow and wide smiles on the faces of the guests as they reveled in this most magnificent celebration. A celebration that teetered for a moment on the brink of disaster.

What we do know is that both Jesus and this couple moved forward from this day. This was Jesus’ first sign, and John’s Gospel catalogs these signs on the way to the greatest sign following His death: the Resurrection.

The couple moves forward from this first sign as well, having benefited from its grace, whether or not they fully understood its import at the time. The grace was meant to fuel them for a life.
Imagine if they were to pick up a copy of John’s gospel at the bookstore and see their picture inside. Maybe the full impact of this sign reaches them years later, and the realization echoes back through time to that special date. While their minds were on a million other things, the care of someone else steeped forward, solicited grace and they received it as a gift, in the present and for the future.

Could the photographer capture that moment of grace on film? Perhaps. The glass, the smiles, the servants amazement. Yet the effects of grace are often more evident. The laughter, the joy, the memories of a new life marked with commitment and celebration.

This week, we will celebrate the baptism of Hudson Michael Herringshaw. And through John’s Gospel and St Paul’s letter to the Corinthians, find our amazing place between Christ and those who need his grace. In years to come, where we stand may be fuzzy, even as grace continues for a lifetime in sharp focus.