Buried under my books and blogs, notes and commentaries both ancient and modern, I found myself still at a loss to imagine what happened this weekend – Good Friday and Easter Sunday.

One thing we can say is the cross is a pivotal place.  What we say about the cross and the resurrection determines our direction, our destiny.

One film I watched lately, CALVARY, an Irish film of 2014 starring Brendan Gleeson as the priest, began with the words from St. Augustine (354-430):

Do not despair: one thief was saved.

Do not presume: one thief was damned.

Another thing to say is that the suffering was beyond our experience and perhaps even our imagination.  While it’s next to impossible to imagine the pain Jesus suffered, most of us have experienced excruciating or exquisite pain at some place and time.  Though, even after viewing Mel Gibson’s, The Passion, and reading about the physiological elements involved in crucifixion, I’m not sure we can grasp the depth of it.

Because when we add the mental anguish, the agony of the soul by the absorption of all the deepest, darkest, God forsaken sin of humanity, and then mix in outright evil -- and somehow he takes it all on/into himself -- we really can’t imagine.  It was crushing, causing blood to pour from his pores.

He was feeling the wrath of his father!

There is much we may be able to begin to grasp by reading and soaking in the gospel accounts, but the how of it all is an issue for God alone to understand.

How did this happen?  Not how did he get arrested and sentenced for crimes he never committed.  We can grasp the innocent for the guilty, but how, you theological engineers, did God make this work?  The Son of God destroyed; his people set free!

There is some comfort to be found in folks like Ambrose of Milan (340-397) who also had trouble figuring out the how of these events.

“That wood of the cross is, then, as it were a kind of ship of our salvation, our passage, not a punishment, for there is no other salvation but the passage of eternal salvation,” wrote Ambrose of Milan. 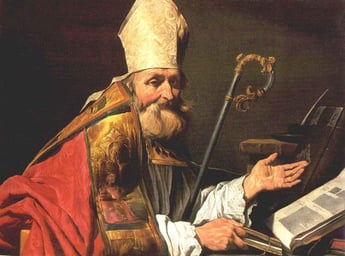 The Son of God destroyed, his people set free—surely we have just as much trouble apprehending this as Christ’s own disciples. Early Christian writings focus not on the mechanics of the cross, but its implications for our lives.  What are the implications for your life?

That we may know that this mystery of the common redemption was most clearly revealed by the prophets, you have also in this place: “Behold, it has taken away your sins;” not that Christ put aside His sins Who did no sin, but that in the flesh of Christ the whole human race should be loosed from their sins.

O the divine mystery of that cross, on which weakness hangs, might is free, vices are nailed, and triumphal trophies raised. For Christ died for us, that we might live in His revived Body. Therefore not our life but our guilt died in Him, “Who,” it is said, “bore our sins in his body on the tree, that we might die to sin and live to righteousness. By his wounds you have been healed.”*

We don’t need to understand the how to respond to the event of Good Friday.

One of the thieves turned to Jesus and asked him to remember him, and he was there for him.  That made all the difference in his destiny!