8AM TRADITIONAL SERVICE
10AM CONTEMP. SERVICE
Articles » Faithfulness is fruitful

Here are a number of incredible servants of grace I met island hopping the past couple weeks.  Their faithfulness and the light of our Lord shone brightly.

- This week my Island hopping was James Island and Pawley's Island -

"The story of the birth of The Anglican Mission"

Founders of THE ANGLICAN MISSION IN AMERICA

One story Bishop Alex Dickson told on our ride from James Island to Pawley's Island was that in 1998 he and Bishop Fitz Allison, having retired from their dioceses in the Episcopal Church, felt something had to be done because of the direction the Episcopal Church was taking.  They flew to Singapore and met with Archbishop Moses Tao.  He asked how old they were and when they said 72, he said 65 was the retirement age for ministry in his province, so 'bring back some younger men.'  And so they did in 2000.  They brought back John Rodgers, founder of Trinity School for Ministry and former professor Virginia Seminary, and Chuck Murphy, rector of All Saints Pawley's Island, who were consecrated bishops in Singapore and sent to the US as missionary bishops, and that was the birth of

The Anglican Mission in America.

The reason I was there: I had been asked by Archbishop Kolini to deliver thanks in person, from him and from the College of Consultors to these people who were so instrumental in establishing The Anglican Mission - Bishops FitzSimmons Allison, Alex Dickson, John Rodgers, Chuck Murphy.  On Monday morning I picked up Bishop Alex in James Island and we drove to Bishop Fitz's home about an hour and half north.  I gave them a letter of thanks signed by the consultors, we put in a call to Bishop Rodgers, and we talked with Bishop Chuck Murphy, the first Apostolic Vicar of the Mission, and he had just walked in from a radiation treatment but was quite gregarious.  What a blessing!

Both +Fitz and +Alex are still going strong 20 years later.  I can't tell you the blessing I received in being able to interrupt a day in their lives!

I share that to say faithfulness is fruitful!  For example: Alex is involved with at least 2 small group Bible studies he told me about, and Fitz is leading the upcoming retreat for the bishops designates, Dan Scott and Matt Kessler.  Both are still sharper than tacks and very involved in ministry.  On the ride to and from Alex shared many stories, leaving me in tears most of the way;  one was how he led a well known known surgeon to the Lord when he came to him saying he had cancer and was afraid of dying.  And how he stayed with him to the end.  Faithfulness is fruitful!

- Last week the island was the Island of Hispaniola -

Below: Canon Donlon, Fr. Pierre, Pastor Julian, me, and Fr. Burnett.  We were exploring the possibility of Anglican Mission Haiti.  It was a chock full 2 days of sharing, dreaming and planning, and it looks very promising! 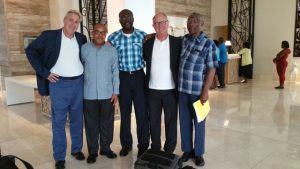 "I don't pray for success, I ask for faithfulness"  Mother Tersea

I am praying that we all continue to pursue faithfulness in our Worship/Word/and Prayer disciplines,