Frs. Dave McDaniel and Ken Dean (from Dallas) and I arrived in Delhi the evening of September 1. After an all too brief night's sleep at the Campus Crusade Conference Center, we headed north to Rajashistan, near Pakistan, at 8 a.m. (Bishop William's flight was delayed and wasn't able to make this part of the trip with us.) 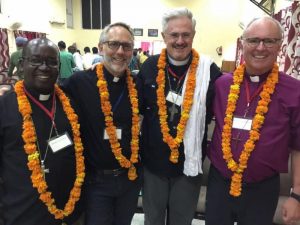 The plan had been to arrive for a late lunch and then to address about 1000 believers in an open field. That was changed because the week before 38 people had been killed in a riot in the area, and our leaders were worried about our safety.

The leader there is a man named Rajendar, whom we ordained a priest last year. He should be a bishop, as he oversees 95 churches and about 2,400 people. He's the one who changed the plans, and he had something else in mind.

Instead of the big outdoor rally, we met in several different locations. We 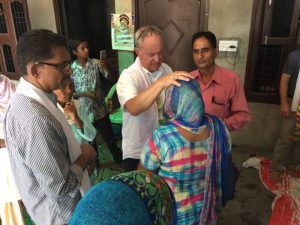 were greeted with leis and we worshiped. I would say a few words, as would the others on the team. Then we would pray for everyone there, usually about 100 people. Following that, we were fed. When we arrived at the fourth location, I told Ivan that I didn't think I could eat another bite. "Fake it," he said.

What a fantastic time! These people have so many needs, most are illiterate, and yet they are so focused on their Lord, that as Paul said, "all else is rubbish." 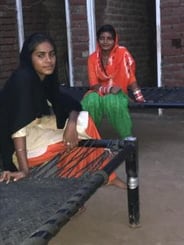 A vignette: Thanks to your support, at one home we visited which had been devastated by the recent rains, I was able to give Rajendar 32,000 Rupees, about $500, to help restore the home. A young girl named Reena, pictured left, lived there, who had been trained by Ivan and Rajendar's ministry to be a beautician. While there, praying in the devastation, and seeing her face, I felt a nudge from the Holy Spirit to do something. Thank you for your support!

We got back to the conference center at 4 a.m. Sunday morning, as the 200 or so attendees began to arrive from all over India. Many faces were familiar. (That is Rajendar to my right.)

The daily routine: The mornings began with worship and then teaching. I taught in the plenary sessions on the Holy Spirit every morning for about 90 minutes.

We broke for tea at 11, and then Fr. Dave met with the lay people, and Fr. Ken and Bishop William met with the ordained and to-be-ordained until lunch at one. Felicita met with about 50 women in the morning and afternoons.

In the afternoons, Ivan, Rajendar, Thomas (who also was ordained a priest last year), Bishop William and I interviewed the candidates to be ordained. Most are young, in their twenties and are risking a lot to be an ordained Christian.

The evenings were filled with praise, worship and testimonies -- we videoed a number of testimonies.

At the closing Eucharist, Bishop William and I ordained 9 to the priesthood, and 8 to the deaconate. 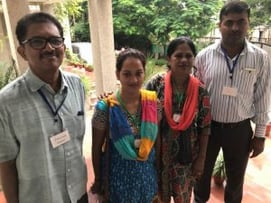 It really is amazing what is happening there! Ivan looks for the people groups that no one else is looking for. He trains his leaders to tell Bible stories, and it is a very disciplined practice; you have to get it right. And people come to know the Lord through the power of the spoken word, like in New Testament times! And then they begin to pray for one another and someone gets healed and the word gets out and "churches" multiply. Some churches are rather small, 25 or so, others can be as big as a couple hundred.

I am so thankful to be able to be part of this work of God, even in a small way, and your support has allowed me to share in this ministry! Be sure to catch Ivan and Felicita while they are still with us.