8AM TRADITIONAL SERVICE
10AM CONTEMP. SERVICE
Articles » Just Walk Away This Lent

Just Walk Away This Lent

What would you grab if your house was on fire? 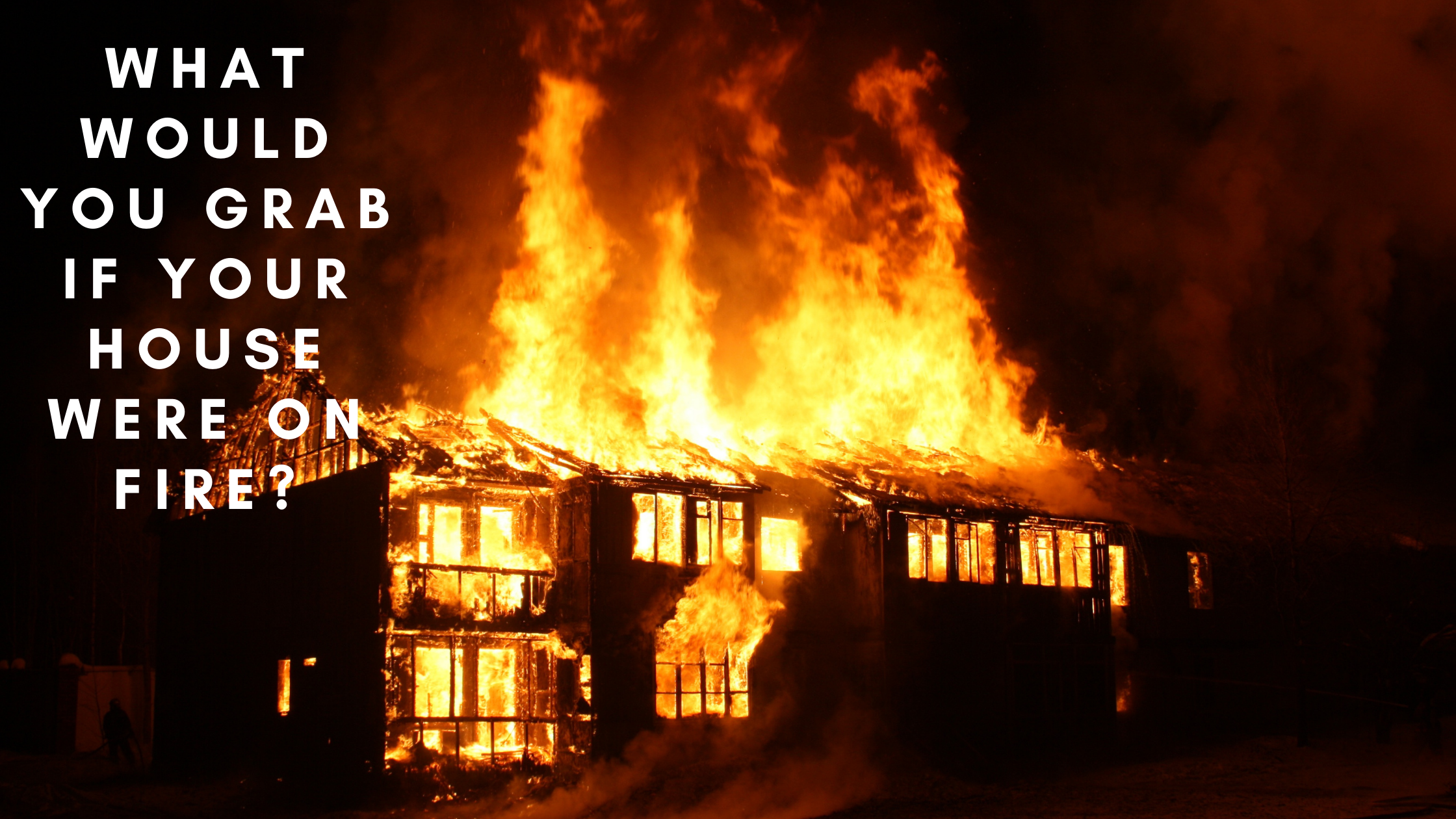 Many people asked me that question after my house burned down on Christmas of 1989.

“What did you grab?” people inquired as they painfully thought of all the things they would grab on the way out of the house.

These were things they couldn’t live without.

Before I answer that question, let me take a minute to give you background on this story.

The Adventure of Building a Home

This all started when Scott and I moved to Birmingham, Alabama and we decided to build a house. For some people, that would be a nightmare. For me, it was a fun adventure.

Not the best floor plan considering Scott had already had two knee reconstructions (and a third one not long after we moved in.) But it was a simple 2-story box house that we thought sounded great at the time.

We loved living there. The neighborhood was great and we had plenty of room for my soon-to-arrive twin daughters. And I felt like I had lots of space for all my “stuff.”

I'm a Saver (aka Packrat)

See, I’m kind of a packrat. (My sisters would question my use of “kind of” and replace it with much stronger words.) My parents saved a lot of stuff, so I guess I got it from them.

I saved everything. I had boxes and boxes of saved baby clothes as my twin daughters outgrew them. I mean, seriously, I might have another daughter one day, so of course, I need to save all the clothes.

That meant that my next child would have two of everything. But how is that a problem! 😊 The more the merrier.

I also liked collecting things. For example, Scott and I had a huge collection of vinyl records. (They’d probably be worth something now. I always figured I was sitting on a goldmine!) 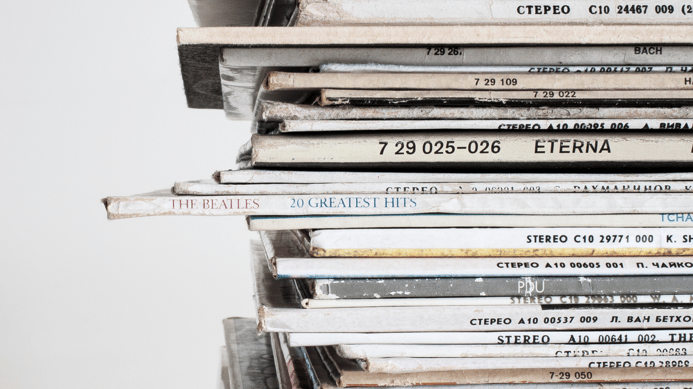 I had lots of things in the house that I couldn’t live without. I had my grandmother’s dining room set, which was very special to me. I had all my antique furniture that I had restored as a hobby  - something my mom and I did together. It was one of the fun memories I had with my mother - antiquing together, finding great deals on furniture that had seen much better days, and then restoring them to their original beauty.

My mother died a year before I was married, so my antique furniture brought back those fond memories we had together.

Even when something broke and needed to be discarded, the thought of getting rid of it was too much. We’ll just store it in the basement or attic and maybe, one day, I will get it fixed.

So, when we woke up at 2:30 am Christmas morning with the smoke alarms going full blast, we couldn’t believe that the unthinkable was happening.

The Night of the Fire 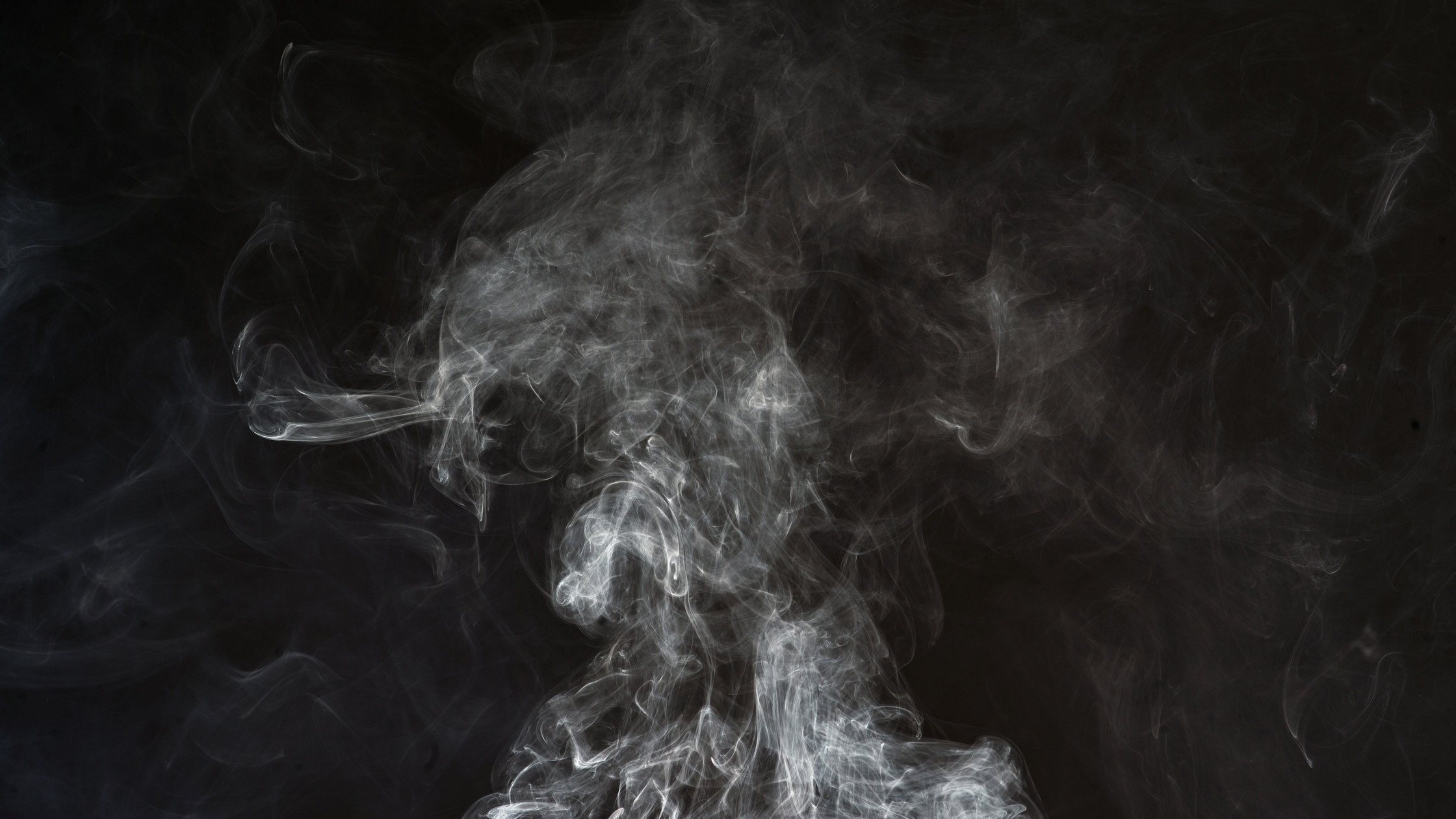 Scott noticed our bathroom was on fire. My 2-year-old twin daughters saw the fire coming through their bedroom window.

Scott and I ran to our daughters’ bedroom and I grabbed both of them in my arms even though I was 7-months pregnant with my third child, Alexi. (So yes, all those saved clothes were going to come in handy, thank you very much!)

When we made it to the front door and I knew we could get out, I turned around and finally saw the fire engulfing my home. It was quite a shock.

They say that you get disoriented from the smoke in a fire. I think all of it is disorienting.

We stood on the front porch in disbelief, trying to comprehend what was going on. To help you understand just how disorienting the experience of a fire is, Scott decided he needed to go back into the house to call the fire department – and that sounded like a good idea to me too! (facepalm!)

Luckily the phone lines were already dead when he tried to call from the kitchen wall phone, with the kitchen burning all around him! (Yes, these were the days of the dinosaurs, wall phones, and landlines. No cell phones yet.)

At that point, the smoke was so bad he had to crawl along the hallway floor to get to the front door again. (I mean, seriously, how messed up were we to think it was a good idea to go back inside a burning house?) 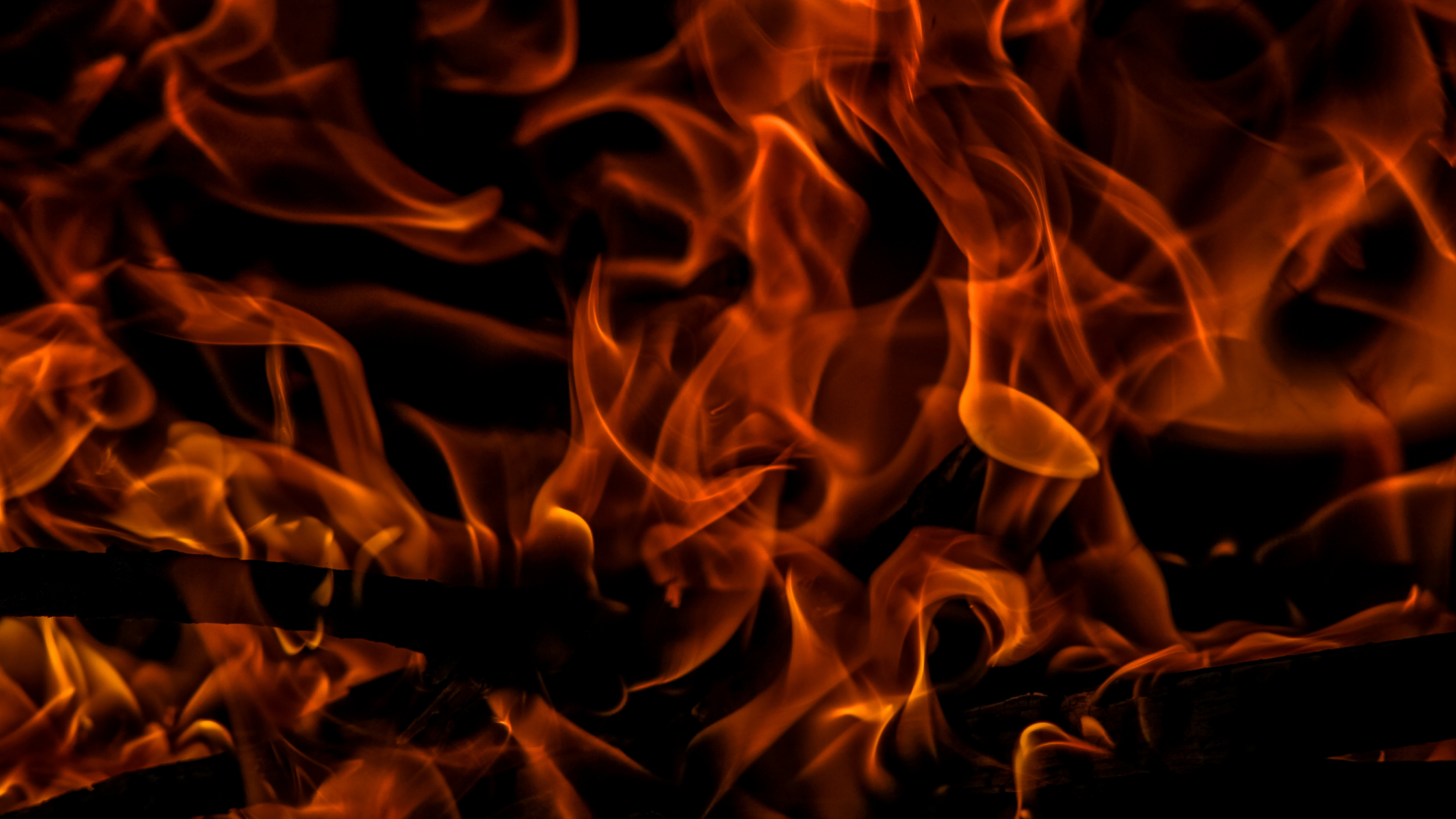 As we tried to get through the brain fog enough to figure out what to do next, we looked across the street at our neighbor’s house. Their beautiful Christmas tree was prominently featured in their living room bay windows.

But to our shock, their Christmas tree was on fire! We had to go wake them up and get them out of their house!

As we ran across the yard to their house, we eventually looked back up again and their Christmas tree was perfectly fine. We turned around to see what their bay windows had reflected and saw our entire house completely engulfed in flames from the foundation to the roof.

What I Grabbed From My House

Everything we had was going up in flames. I had on a nightgown, Scott had on boxer shorts, and my kids had on their PJs. That’s all we had left.

So what did I think to grab on the way out of the house?

That was it. That was all that was needed. 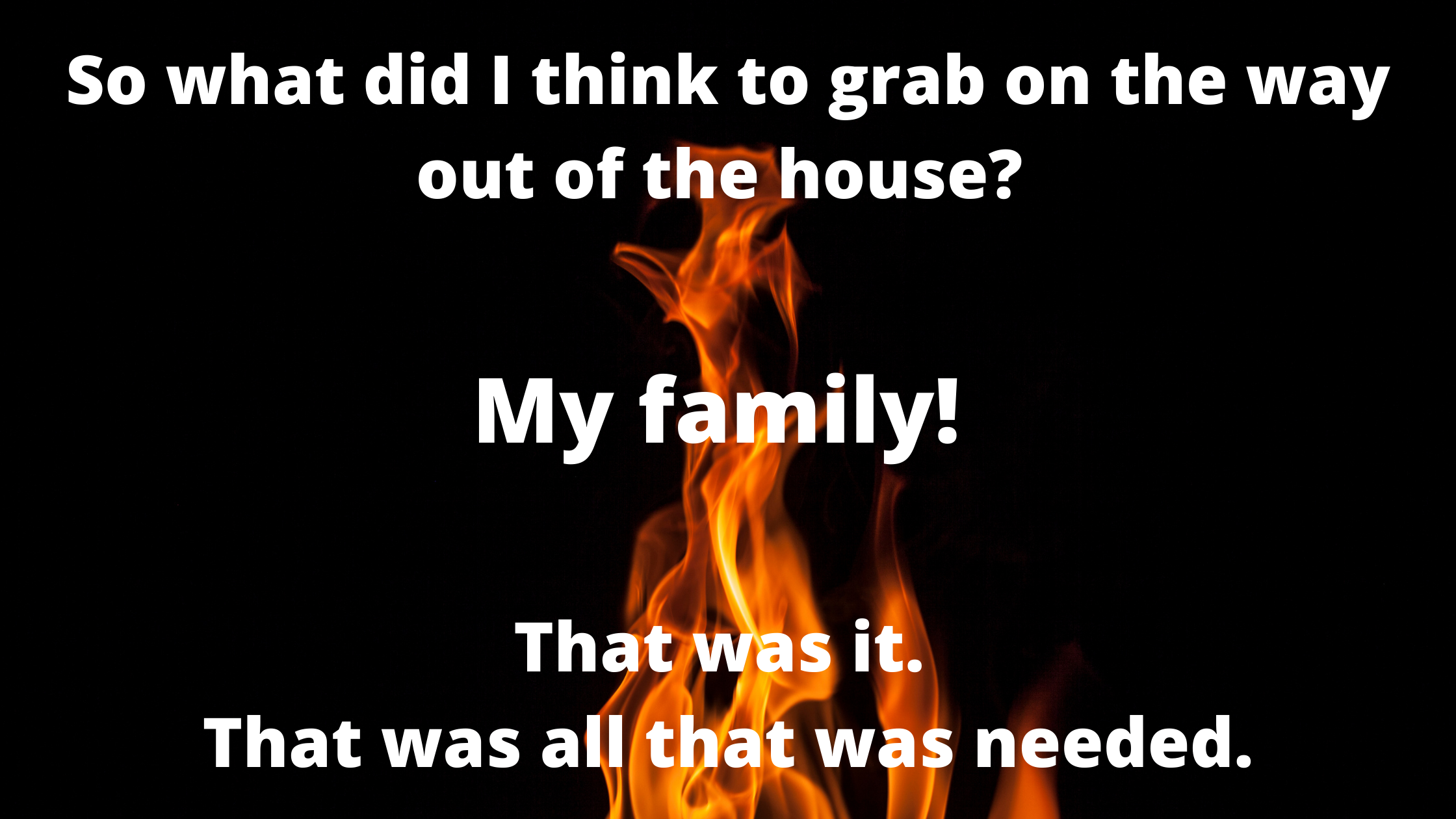 The house and everything in it was a complete loss, except for a handful of items that were miraculously found in the rubble, including my wedding ring.

I dreaded telling my dad that I had lost my wedding ring in the fire because he had given Scott and me the diamond out of my mom’s wedding ring to use as mine.

But I realized after losing everything that I didn’t need so much stuff after all. I had lost a lot of sentimental things for sure, but, in the end, it was all just stuff. Things that I just couldn’t bring myself to give away or throw away were no longer important.

Well, I was a new woman! I was not going to allow myself to save so much stuff again. God was incredibly gracious to allow my family to get out of the house alive and that was what mattered.

So, I would no longer care so much about material things. They just burn up anyway, so why bother.

Time to walk away from all the stuff. 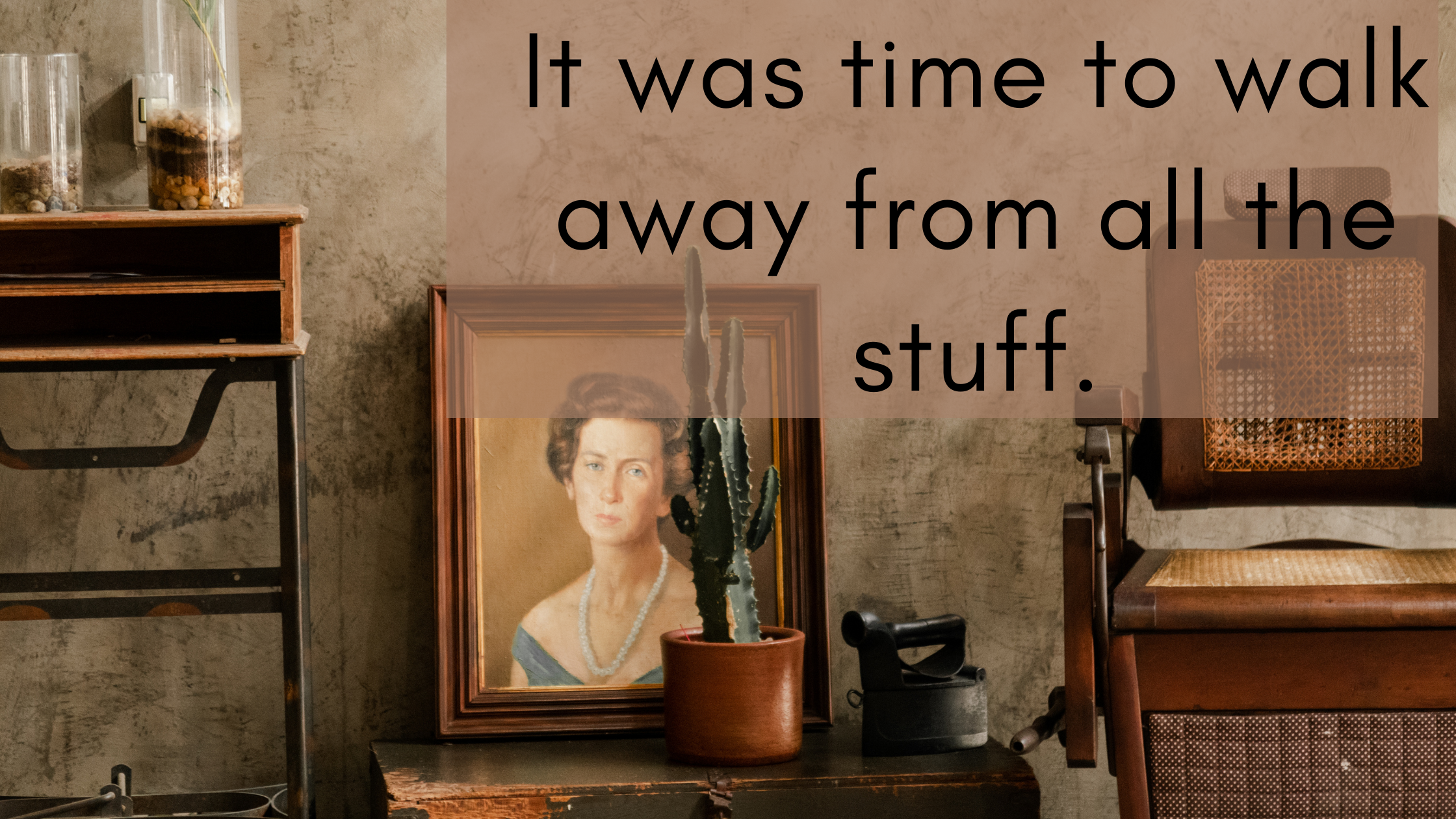 And then we started rebuilding a house on the same lot. Kind of weird since we used to tell each other, “If we just had a different house on this lot, it would be perfect. One without all the stairs!”

We went to an architect and described our dream house and our budget, and he masterfully created a truly amazing house plan. It was exactly what we wanted.

At this point, I had had my third child and was on maternity leave. So I could go by the lot every day to check on the progress of the house.

My builder was great. I was involved in every decision down to the minutest detail. It was my creation coming to life, and it became my obsession.

By the time the house was complete, it was everything I had dreamed it would be.

It filled the hole that was left when I lost everything in the fire. It felt like a part of me because I had poured all of myself into it. It was my masterpiece. 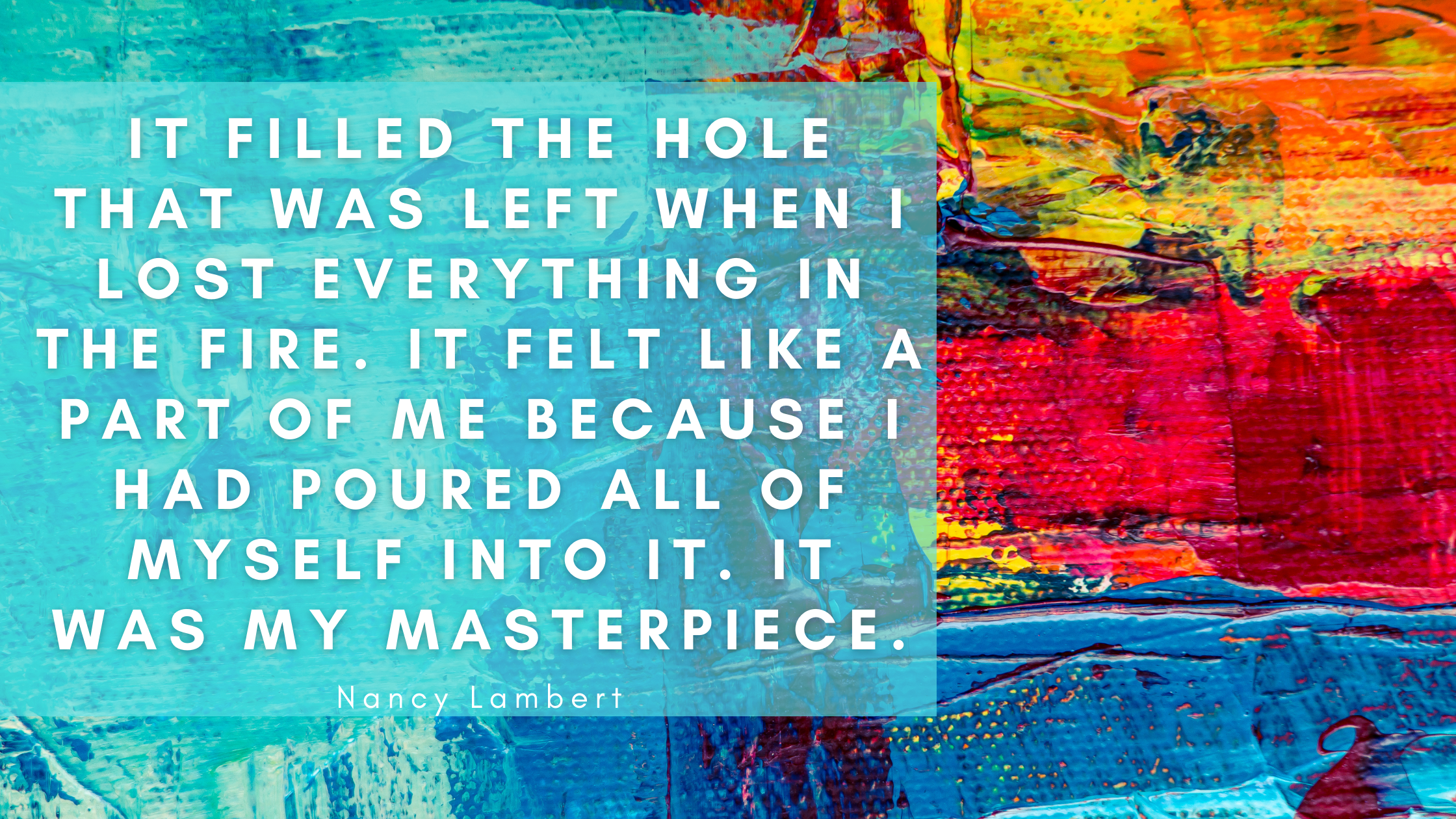 Losing It All Again

The day was finally near when we were going to move in. I could leave my rented apartment and my rented furniture behind and move into my dream home.

Life was going to be good again.

And then Scott received a transfer to Louisville, Kentucky.

I was losing my home all over again. But it wasn’t just my home; it was my HOME. 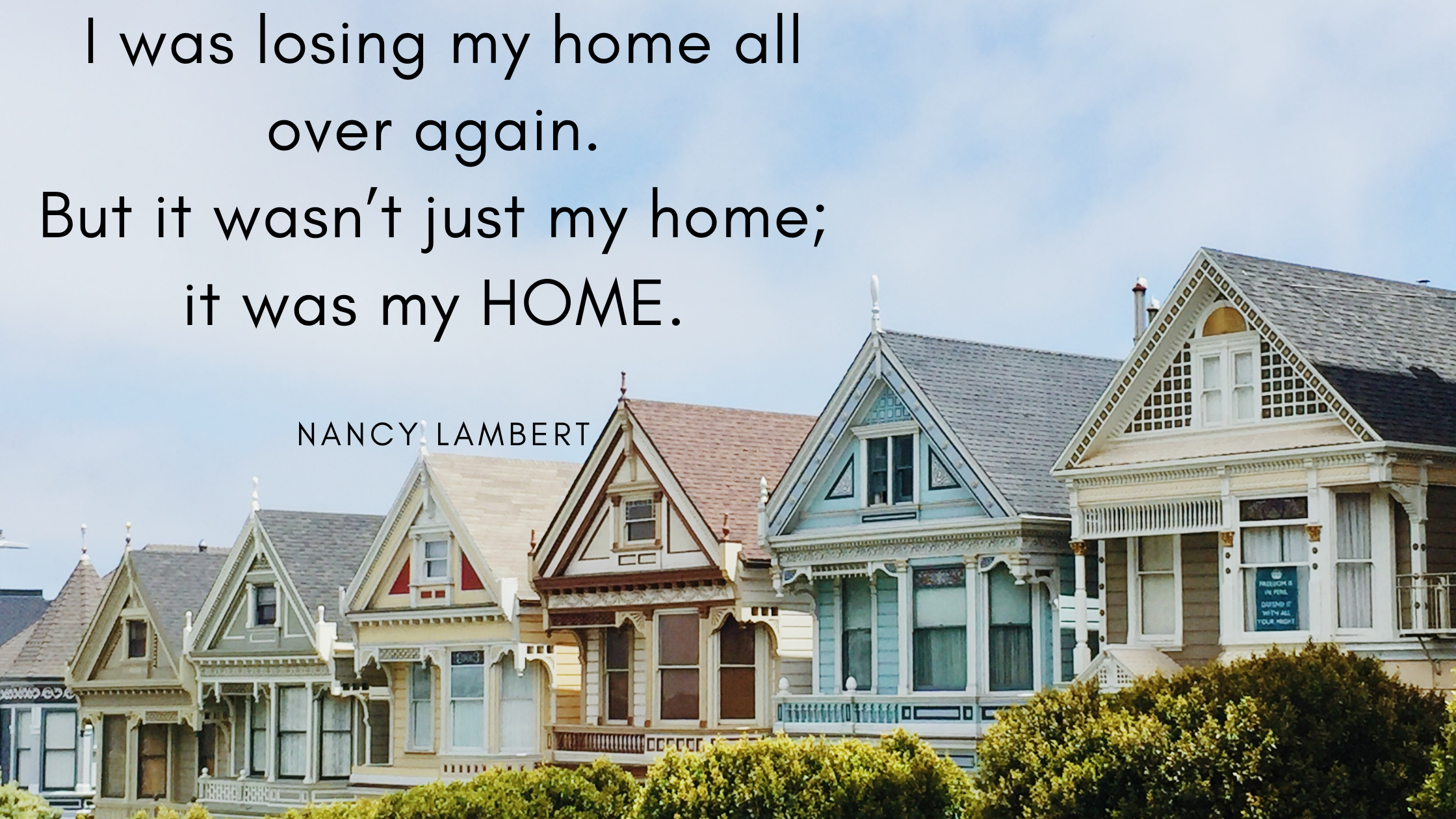 I thought at least we will move in for a couple of weeks so I can experience living in my creation. But we sold the house in three days and the new buyers had one request – you can’t move in. They wanted it new and fresh.

Once again, we ended up in my sister’s basement for a few weeks, the five of us sleeping in one bedroom together. You see, that is where we stayed immediately after the fire for a few weeks until we found a place to live and some furniture to rent. My sister was gracious enough to bring us all in and share her house with us, not once but twice.

It felt all too familiar, living in the basement, having lost my home.

Breaking Free From the Hold

But I realized later that it was frankly one of the most important things that ever happened to me.

Not the fire, although I learned a lot from that too.

But God knew I had become way too obsessed with the new house, and I had allowed it to become much too important to me.

I had told myself after the fire that I wasn’t going to get attached to material things again. And yet, here I was with my whole being tied up in that house.

I needed to walk away. I needed to break free from the hold that it had on me. And God helped me do that.

I’m not saying that I was happy walking away from it at first. But it hit me like a ton of bricks how much I had allowed myself to get caught up in the house.

I needed to walk away.

When Walking Away Is Good

Am I still a packrat? Did I learn my lesson?

Well, I guess it’s all relative.

I’m a huge packrat to my sisters, but I did stop collecting things. Well, except for nutcrackers. Haha. Go figure. I just think they are so much fun and they come with so many different personalities.

So, I have a collection of nutcrackers, which you will notice if you come to my house any time of the year because I tend to leave more out each year after Christmas. Why put them away if I enjoy them so much? 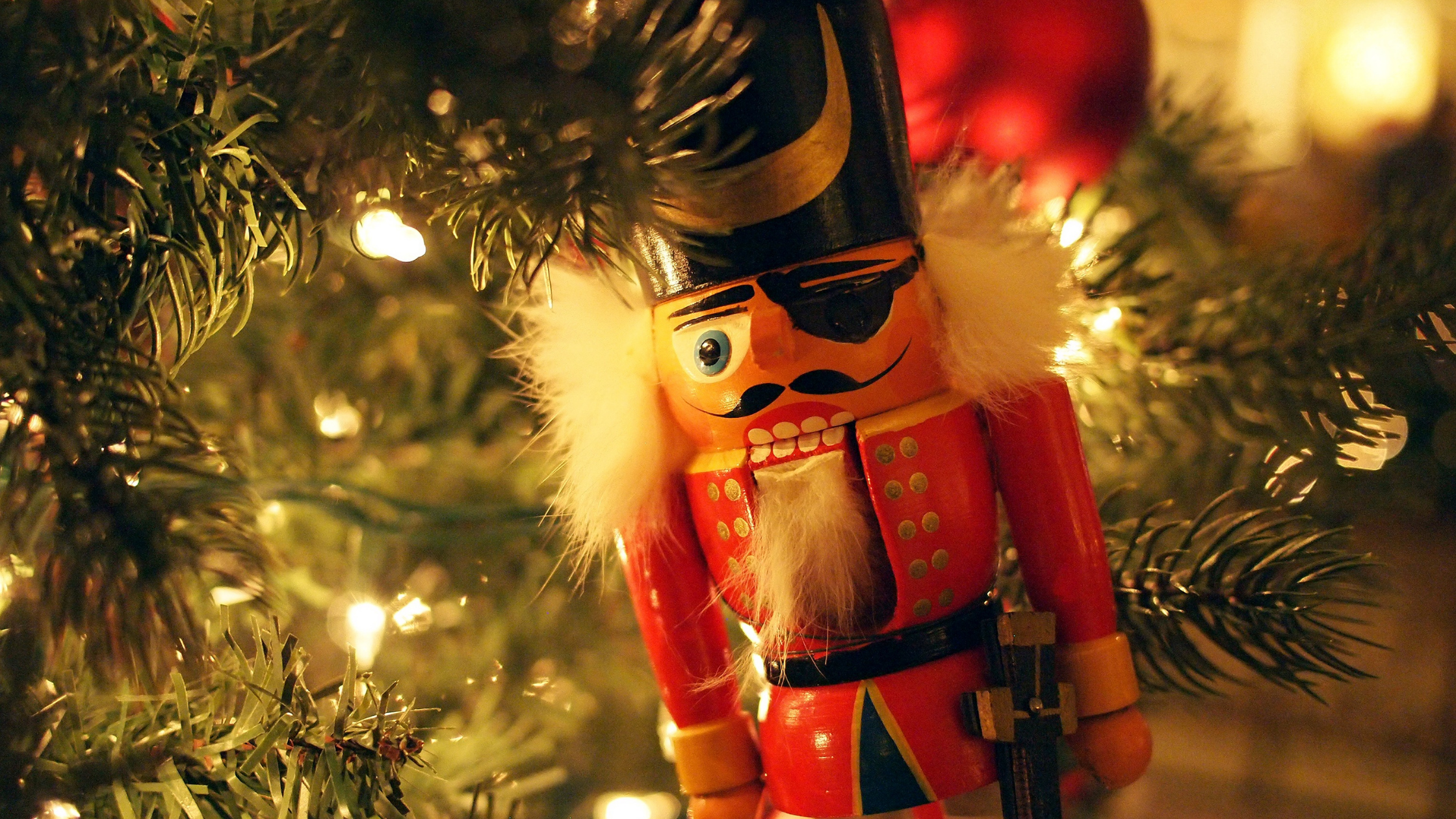 And, I still have a hard time not holding onto things. I have the hardest time throwing something away.  I’m working on it though. This past year Scott and I started moving towards decluttering our life, giving away a lot of things and throwing away things that just needed to be pitched.

I am forever thankful for God's lesson when I became too attached to a material thing again, even if it was a house. I’m thankful for walking away.

Because the material things are not what’s important in this life. It’s our relationship with our Lord and Savior, leaning into what is eternal and not the things that are here today and burned up tomorrow. 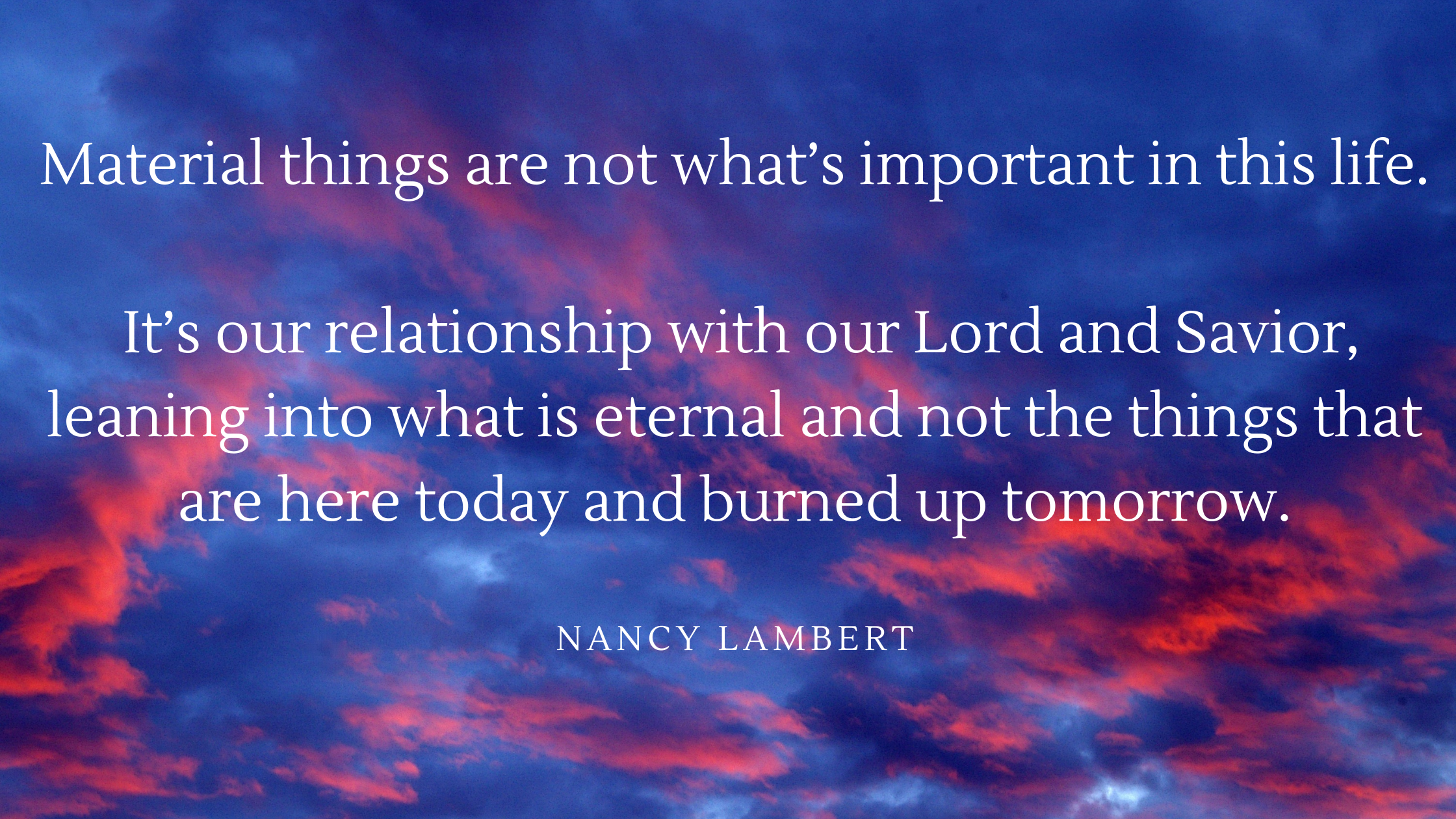 During this season of Lent, think about what you may need to walk away from if it’s filling a space in your heart that should be reserved for God.

Nancy has been married for almost 40 years to her wonderful husband Scott. They are the proud parents of 3 daughters, 3 sons-in-law, 6 grandchildren, and 3 grand dogs. Nancy and Scott are also co-founders of a digital marketing company, Xcellimark.