8AM TRADITIONAL SERVICE
10AM CONTEMP. SERVICE
Articles » The Great 50 Days of Easter Day- 16

Who are you traveling with on the way to the Risen Christ? You may be like them or quite unlike them, but together you are on the way. Pray that God will bless their walking this day, and praise God for the gift of their companionship along the way. 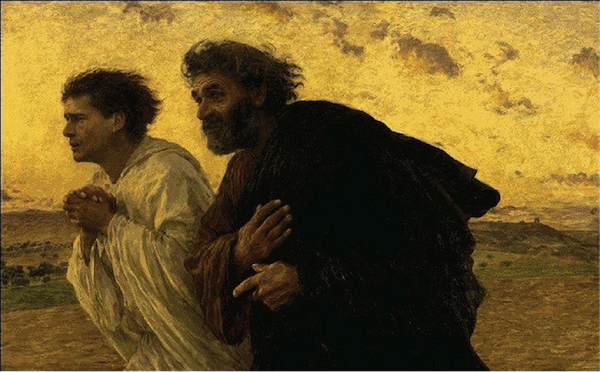 Eugene Burnand created this painting of Peter and John running to the tomb. There is much shared history between these two men, and much that distinguishes them from one another. Their age, their leadership roles among the disciples, their response to the trial and crucifixion of Jesus. But here, on Easter day, the two of them are responding to the news of the empty tomb by running towards it together.

Nearly everyone can name someone that has been separated from them by an event. Their response to an emergency, to a sorrow, to a choice has led to a gulf between us and them. Or, it was our own choice or lack of one that created the gap. Maybe it is a friend, a parent, a co-worker, a sibling. Imagine this first conversation between Peter and John. So much to say. Perhaps very little ability to say anything at all.

In all events, here is the opportunity to start again. Side by side, they run to the common ground of their fidelity and infidelity, their righteousness and their guilt, their duty and their dereliction of duty. And what matters most is that the tomb is empty. Because if the dead are raised, then justice and mercy need not be at odds. Restoration and reconciliation will come later, in steps, but all under the Lord’s direction and mercy.

What grips them on Easter is the chance that what has come between them won’t have to stay between them. And that seeking the Risen Christ is the chief way to move forward. What name came to your mind earlier? What difference might the Risen Lord make as you move towards him?