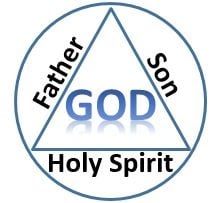 This Sunday is Trinity Sunday in our liturgical year and I have borrowed some bits and pieces on the Trinity from Matt Slick who is the President and Founder of the Christian Apologetics and Research Ministry -- carm.org.
Come Sunday, you won't believe what St. Augustine said about the Trinity.
But first:
From the Sunday lessons:
What Jesus said:
Matthew 28:19, "Go therefore and make disciples of all the nations, baptizing them in the name of the Father and the Son and the Holy Spirit."
What Paul Said:
2 Corinthians 13:14, "The grace of the Lord Jesus Christ, and the love of God, and the fellowship of the Holy Spirit, be with you all."
What the Old Testament Says:
Genesis 1:26, "Then God said, "Let Us make man in Our image, according to Our likeness; and let them rule over the fish of the sea and over the birds of the sky and over the cattle and over all the earth, and over every creeping thing that creeps on the earth."
What the Jehovah's Witnesses say about the Trinity
"Never was there a more deceptive doctrine advanced than that of the trinity. It could have originated only in one mind, and that the mind of Satan the Devil." Reconciliation, 1928, p. 101.
What Mormonism teaches about the Trinity
"The trinity is three separate Gods: The Father, the Son, and the Holy Ghost. "That these three are separate individuals, physically distinct from each other, is demonstrated by the accepted records of divine dealings with man," (Articles of Faith, by James Talmage, p. 35).
What Christianity teaches about the Trinity
The word "trinity" is a term used to denote the Christian doctrine that God exists as a unity of three distinct persons: Father, Son, and Holy Spirit.  Each of the persons is distinct from the other yet identical in essence.  In other words, each is fully divine in nature, but each is not the totality of the other persons of the Trinity.  Each has a will, loves, and says "I" and "You" when speaking.  The Father is not the same person as the Son, who is not the same person as the Holy Spirit, and who is not the same person as the Father.  Each is divine, yet there are not three gods but one God. There are three individual subsistences or persons.  The word "subsistence" means something that has a real existence.  The word "person" denotes individuality and self-awareness.  The Trinity is three of these though the latter term has become the dominant one used to describe the individual aspects of God known as the Father, the Son, and the Holy Spirit.
Included in the doctrine of the Trinity is a strict monotheism which is the teaching that there exists in all the universe a single being known as God who is self-existent and unchangeable ( Isaiah 43:10; 44:6, 8).  Therefore, it is important to note that the doctrine of the trinity is not polytheistic as some of its critics proclaim.  Trinitarianism is monotheistic by definition, and those who claim it is polytheistic demonstrate a lack of understanding of what it really is.
Is the Trinity confusing?
Another important point about the Trinity is that it can be a difficult concept to grasp, but this does not necessitate an argument against its validity. On the contrary, the fact that it is difficult is an argument for its truth.  The Bible is the self-revelation of an infinite God.  Therefore, we are bound to encounter concepts, which are difficult to understand--especially when dealing with an incomprehensible God who exists in all places at all times. So, when we view descriptions and attributes of God manifested in the Father, the Son, and the Holy Spirit, we discover that a completely comprehensible and understandable explanation of God's essence and nature is not possible.  What we have done, however, is derive from the Scripture the truths that we can grasp and combine them into the doctrine we call The Trinity.  The Trinity is, to a large extent, a mystery. After all, we are dealing with God Himself.
Blessings to you all!