8AM TRADITIONAL SERVICE
10AM CONTEMP. SERVICE
Articles » A Most Unusual Father's Day

A Most Unusual Father's Day

Sunday morning I plan to continue to look at the close of St. Matthew's Gospel, the Great Commission, and we will also, most appropriately, hear from our missionary team, which has returned from Costa Rica.

I ended last Sunday with the story about a trip from Kigali, Rwanda, to Brussels, Belgium, about an 8 to 9 hour leg. In case you missed it, (and the sermon is on the web site) I decided to tell it again.

Whether this story has an inherent point or not, I do not know. However, as I have reflected on it over the past year, I have found a helpful point and perhaps you will as well. 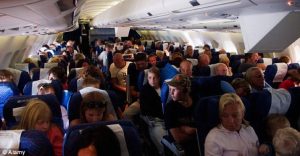 The Late Night Flight from Kigali

As we got ready to board the late night flight in Kigali, I noticed that my seat assignment was not what my paperwork had indicated. I was supposed to be in row 16, and instead was in 19.  You wouldn't think it would matter.  When I inquired about it, I was told both were aisle seats and so it didn't matter.  Well, it did matter.

Once on the plane I found that I was in a row of four seats which were covered over with two sleeping young boys, about the ages of three and five, I guessed, draped over their well snuggled mother. I apologized for making one of her little boys move, as they must have been tired, it being so late, and then she informed me that in addition to the late hour they were not feeling well.  I assured her that I would move, most gladly, and give her the space as soon as the entry door was closed.

I looked ahead at my traveling companions. Fr. Christopher was the only one in a row of four seats just three rows ahead of me. And Earl, who had been teaching in Tanzania, had an empty seat next to him in a row of two, and had two seats empty behind him. So there were plenty of empty seats just ahead.

As soon as the door closed I moved up and took an empty seat -- but not for long.  About 60 seconds was my guess, not even time to fasten a seat belt.  I was immediately and most abruptly bounced.

"This is 'coach comfort'" I was informed.

"I paid for coach comfort," I said.

"Show me," and the flight attendant asked to see my boarding pass, which as you recall, had the incorrect seat number on it. I went to find my original paperwork and realized I had left it when trying to explain the wrong seating assignment to the person in the airport.  I then presented the flight attendant the situation:  There's a pooped mom with two exhausted and sick little boys. She needs the space.  And here are a whole bunch of empty seats. The flight attendant was not moved, nor was I.

I returned to my seat and assured this tired mother I'd find another seat as soon as we were airborne. I walked the entire plane only to find that there was no room in the inn.

When I returned I explained to my traveling companion, whose English was minimal, but far better then my Swahili, that I had seven grandchildren and really love kids, even sick ones, and that I would keep the arm rest up and they could take all the room they needed.

Of course, the thoughts in my head were certainly not so gracious or gentle. "This is unfair!" "It's an injustice." "And especially since I paid for coach comfort."  (I hate to add here, and perhaps you have thought of this already, that had I had my wits about me, I had my original reservations on my phone. Alas...) I was fuming, as you have probably guessed, and I didn't know how I would fare were I to ask our Lord why this was so unfair?  It did occur to me that it would be good to change my heart and my attitude as I still had better than eight hours to sit there.  This was a long leg, and not being in coach comfort, had no leg space to spare.

I did ask the Lord for help, and I'm pretty sure He gave it, as it was a relatively peaceful ride with an occasional five-year-old's arm flaring up into my face and waking me from the movie I had dozed off on.  I really do love kids, even ones coughing and sneezing asleep on my lap.

Once in Brussels the three of us, feeling much like the Tin Man, Scarecrow, and Lion, I suspect, were moving along silently with blank stares, riding an interminably long moving sidewalk toward our connection, we hoped.

As we neared the end I heard footsteps running up behind me. It was a young boy, about seven years old I guessed, and as he passed me at the end of the moving sidewalk his shoelace got caught in the disappearing metal walkway. (My son Peter has since shared images of some gruesome injuries he has seen from similar accidents.  Like the skin being peeled off the bottom of a foot.)

Without thinking, because that wasn't an option at this time, I scooped him up with my left hand, holding my bag in my right, and while straddling the walkway, I wanted to reach down and pull off his sneaker but instead seeing Earl and Christopher had turned around, I said, "Earl snap the lace!"  Like a practiced ninja warrior, with one swift swoop, Earl slashed the tie and set him free!

His mother, coming now full speed ahead up the walkway, was now this young man's bigger problem.  He ran off with her on his heels.  The lady behind us, however, stood appropriately amazed, as did we.  What just happened here?

So here's the lesson I have gotten from this one time, most heroic, act in my life.

One commentator I have been reading on Matthew's gospel says that the way Matthew is using disciple and discipling here, is that of being with someone, caring and listening.  Waiting patiently for an opportunity to share the gospel -- coming alongside, being present, living into the sacrament of the present moment.

I have wondered since this most wonderful Father's Day a year ago, if it wasn't just being there with those I traveled with - that did something deep inside of me that allowed me to respond in a moment that I was least expecting or prepared for, that seemed to have been helped from above?

For me it's a feasible take-away from the story.  Be with those you find yourself with.  Get out of yourself and be there for them.  And perhaps God will change something and prepare you for what's coming up from behind you.

I still wonder where his father was.  His heavenly Father was obviously watching out for him.  That is good. Amen.

Thanks for listening, and Blessings to you all this Father's Day,