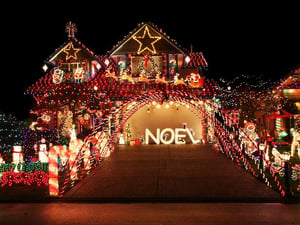 Some neighborhoods are extraordinary at Christmas. Inside and out, homes and hearths mark the days leading up to Christmas. Some neighbors have more holiday light ambitions than the Home Owners Association ever anticipated.

I embrace (and defend) the gaudier side of Christmas. I am (mostly) convinced that the incarnation of the Christ in great humility plausibly implies that we may welcome the use of plastic and tinsel in our preparations to celebrate the Feast of His birth.

I am occasionally surprised by some decorations. And I have even seen some things I would be reluctant to place in my own yard.

In some ways, John the Baptist makes an odd Christmas decoration. In the weeks leading up to the Feast of Christmas, we are shown a parade of faithful servants of Christ, pointing forward to His arrival. Many of them are beautiful and we rightly fill our hearts and minds with the comfort they bring to us.

The prophet’s vision of the peaceable kingdom and the return of plenty at the end of the Lord’s victory over evil. The stable animals and the melodious names that will crown Messiah’s throne when his reign of peace and justice commences.

The humility and grace of our Lord’s mother, as she hears and receives and moves forward in trusting obedience to the word spoken to her by the Angel Gabriel. This quiet glory and purity frame the holidays in ways that have drawn the imaginations of the faithful and the seeking towards the birth she awaits.

And then there is John. John the Baptist may never make the cover of the holiday catalog. He might qualify as a lawn decoration, but just as likely, he would be kept in the garage ‘just this year.” His flashing message, his somewhat off-putting manner, or his recurring tune that you are sure you’ve heard a million times already.

Poorer us if we miss his call to prepare for Christmas. We must pass by John’s house to make it to Christmas. And we must pass by Christmas if we hope to share in the blessings that the Christ child brings and secures. John gives us three ways to see Christmas rightly.

First, John alerts us to the importance of Christmas. Jesus himself described John as the greatest of the prophets. (Matthew 11.9-11, Luke 16.16) All the Spirit’s inspiration moving through the prophets and seers of the OT is now blowing at the back of this one who is both a delight to his parents and Herod’s troubler of Israel in the spirit of Elijah.

He is the greatest of the prophets because when he raises his voice and extends his hand, his message is not, “Someday, Messiah will appear”, but “Behold the Lamb of God, here now to take away the world’s sins.”

Second, John the Baptist articulates the breadth of the blessings of Christmas. The Advent readings give us a chance to read ahead into John’s ministry, and they provide for us both a summary and expanded record of his message. And in these accounts, John models for us both the general and particular challenges of following Jesus in our day. As we read of his general message in Luke 3 verses 3 and 18,

“He went into all the country around the Jordan, preaching a baptism of repentance for the forgiveness of sins…. So, with many other exhortations, he proclaimed the good news to the people.”

John also answered the questions of the crowd, many of whom desired to respond individually to his general good news of promised redemption and their recognized need for wholesale repentance and redirection.

They agreed with John that simply claiming family descent from Father Abraham could not guarantee sharing in the coming blessings of the Messiah if in fact the family of Abraham’s corruption and struggles necessitated the Messiah’s arrival. They also recognized that true repentance would be more than verbal. And so the crowds, tax collectors, and soldiers ask John in Luke 3 verses 10, 12 and 14;

"What then should we do?"

"Teacher, what should we do?"

The crowd’s call for spiritual direction eventually becomes a specific call to action and choice to either respond in concrete ways or to turn away altogether. Herod the Fox, who also got specific direction for his situation, rejected John’s advice even though he enjoyed hearing the message of John in the abstract. The same challenge remains for us.

John’s reply can be read in two ways. On the one hand, we can read it as good advice of a moral sort, encouraging holiday goodwill and generosity. Gentle ethics for hard times.

But this would miss the singular role of John to prepare the way for Messiah to arrive. The steps named here are preparatory to receive the blessings and vocation that Messiah Jesus brings. As such, the calls to share, to be honest and to be content are not the end of the holiday season, but its beginning. These first steps lead to a fuller recognition of the world and people Messiah is coming to save, and the greatness of the Messiah who is even now preparing to appear.

This is how the people heard his message, because while his demands were specific and challenging, many in the crowds found their hearts stirred with expectation that Messiah was near.

This leads us to John’s third gift for seeing Christmas rightly. John points past himself to Christ. It is a gift he shares with his mother Elizabeth and our Lord’s mother, whose stories we will hear together this Sunday.

John consistently said to those who came to him for direction, for specific guidance, for inspiration and hope, that his work was preparatory. Even as his role was promised, marked by angelic ministry and prophecy, and said to fulfill the great OT prophet Elijah, John pointed away from himself to the person and the work that only Christ could do. Many questions got the same reply.

“John answered all of them by saying,…one who is more powerful than I is coming”

John the Baptist knew that while Christmas passed by his door, stopping there would be to miss what his ministry of signaling and heralding was designed to accomplish.

And while we are shortsighted to imagine that we might truly welcome the Christ child into our hearts and lives without concrete, intentional preparation, we would be pitiable to exchange the preparations for the Feast that is approaching.

In both memory and hope, Christ’s coming should shape our Advent. And while John may not spring to mind as our favorite decoration, giving him an honored place in our preparations will make our celebrations richer.