8AM TRADITIONAL SERVICE
10AM CONTEMP. SERVICE
Articles » What Do You See?

What Do You See?

Lately, a huge doublewide, honestly ugly, modular building landed on our charming New Covenant campus. When I first saw it I thought, “I’m sure I’ll find the witch’s feet sticking out somewhere. I know she’s here.”

Its landing zone had been ‘out back.’  Out of sight, more or less.  But zoning, or fire, or water, or sewage, or something brought it in from ‘out back.’  People used to say when coming on our property, ”What a beautiful campus.”

When someone asked, “What is that?” I came back with, “What do you see?”

After 40 plus years in the ministry I still find parish life fascinating and unconquerable. There are eddies of opinions swirling about and a plethora of tastes that go well beyond the riverbanks of religion. I can understand the diverse opinions but in this case what I find truly amazing are those that haven’t noticed the monstrosity in their midst!

Antoine de Saint-Exupery, the author of The Little Prince, once said, “If you want to build a ship don't assign them tasks and work, but rather teach them to long for the endless immensity of the sea.” *

Good idea but…Even with the promise of paint, a porch, and landscaping, I’m not sure the transformation of the edifice will be sufficient to satisfy. So the vision must go beyond.  Must be transformed.

Sometimes we learn to see all over again.  Like in the Revelation of John, “He who has eyes to see let him see what the Spirit is showing us.”  Yes, I know it is ears, but on April 18th I had an experience like this at the Boston Marathon.

Our oldest son, Peter, and I went to Boston for his fourth Boston Marathon. I was fortunate to be filling in for an injured friend. I was doubly honored in that 18 years earlier our son AJ, who was killed in an auto accident in ‘04, had accompanied him. Even with such big shoes to fill, we had a wonderful time Sunday traipsing about the city, seeing the sights, visiting the memorial from the 2013 bombings, and attending old Trinity Church.

Monday morning came early and Peter was ready.  He had trained well.  Having run numerous other marathons, he knew his stuff -- an earned doctorate in physical therapy didn’t hurt. He may have relied most on the support of his 3 children, friends and family. I waved good-bye at the bus to Hopkinton.

He was off.  In the first wave and doing what he had hoped for in the first half.  But then, suddenly, his body said, “Enough.”  His hamstring muscle twisted into knots and his body was out of resources.  His face and clothes were literally sweated white with salt. The people in the medical tent, after massaging his leg, refueling his electrolytes, and stuffing him with salted pretzels said he could carry-on so long as he drank Gatorade all the way to Boston.

Still 10 miles to go! Can you imagine?

When at last I saw him, white with salt, he had to be in both physical and emotional misery. Yet, instead of defeat, his face shown with victory!

”What happened?” He told me the story about dragging himself into the medical tent and then added with a smile, “Dad, I did what I told my own son to do in a recent race when he wanted to quit because he was going to lose. I told him, ‘we need to finish.”’

I suppose the words of Paul could have crossed my mind and perhaps they did, “I have finished the race, fought the good fight…” What I think of now are those of Bishop Lesslie Newbigin:

“The resurrection is not the reversal of a defeat but the manifestation of a victory.”

Victory!  That was something different, new!  It wasn’t just the best you could give given… but it was more.  So it was in Boston that April Monday. 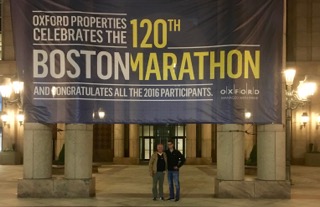 At the celebration dinner, most of Peter’s friends offered him condolences. He was polite, simply smiled and added,  “Well, I finished.”  I could’ve added,  “Finished well -- even better than having hit his PR.”

One of his friends did see the victory Peter experienced. He hadn’t made it to Boston this year but had followed Peter on his iPhone. He called and said, “Last year, Peter, I crawled into a medical tent at about the same mile. But I didn’t come out. I took a ride back to Boston. Peter, you won the race, you finished the race.”  He understood. He saw!

So back to this thing gobbling up our church lawn.  Some of us are surely recalling how just a few years ago we received the largest gift we had ever received to build something on our property. We decided one of our partners needed it more than we did and so we gave it away.

But this new space isn’t for us. It is for Global Teams Ministries, a missionary outreach to unreached peoples groups all over the globe. It’s a ministry very much like what Ivan and Felicita Sikha are doing with Mission India.  And we get to support that in this very tangible way. We can, of course, see it in this light and perhaps smile in victory.

I sometimes look at our Anglican Mission like this, our society of mission and apostolic works, connected with courageous partners in distant lands, and I see new hope for my children and grandchildren in our expression of the Faith.  I maybe a dreamer holding hands with other dreamers, but then I see the Father’s smile and say, “So be it.”

YOU ARE WHAT YOU LOVE – The Spiritual Power of Habit, by James K. A. Smith p. 11