8AM TRADITIONAL SERVICE
10AM CONTEMP. SERVICE
Articles » Our Safe Arrival

Resurrection reactions move from fright to frivolity, or we might say from fear to freedom, for the disciples.  The death of Jesus shattered the community of followers.  They were fearful. 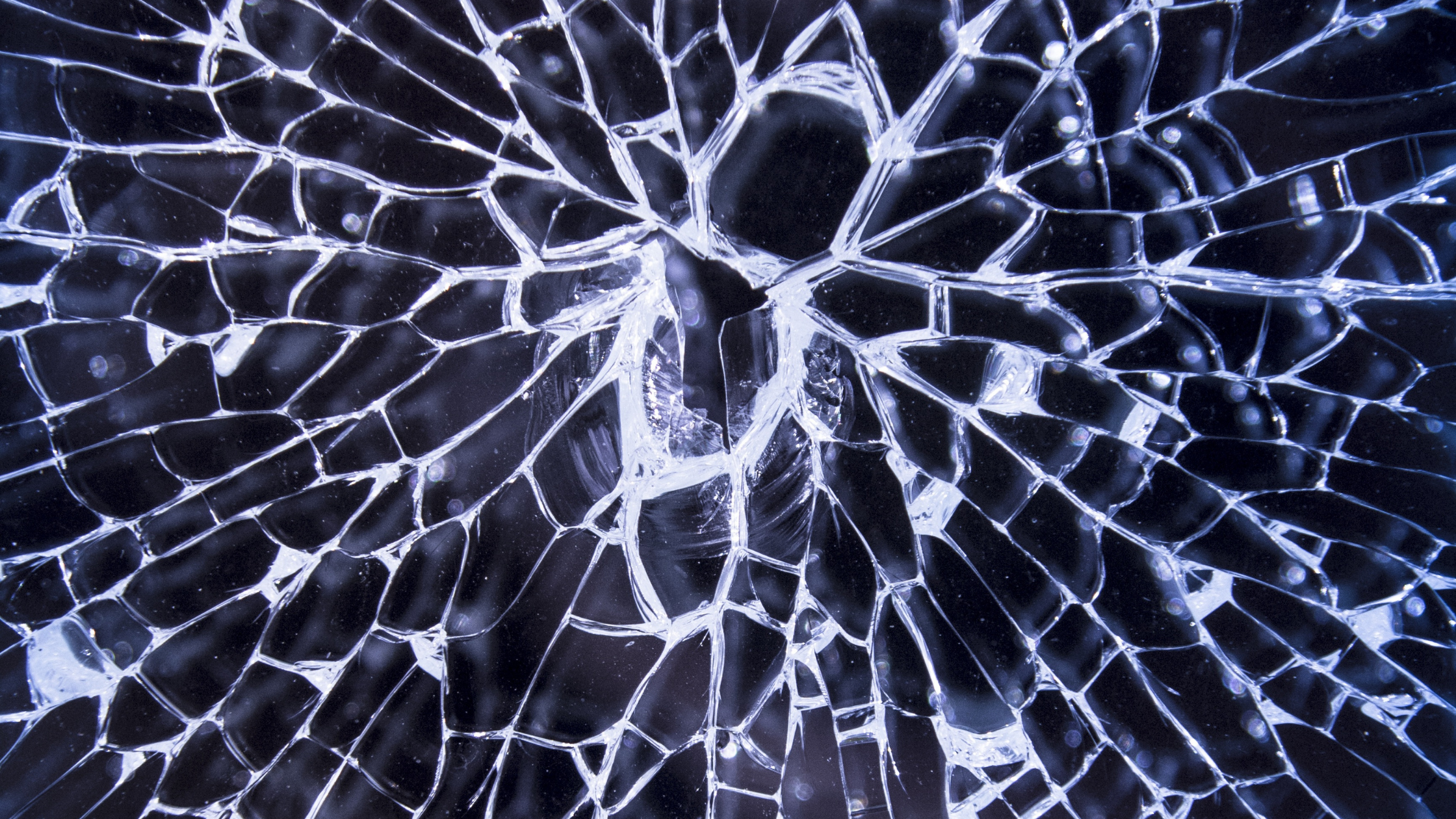 ‘Strike the shepherd and the sheep scatter,’ as the prophet says.

Hiding, gathering in secret places...in the minds of the disciples the death of Jesus not only ended his physical life but murdered the truth he believed in.

In one final stroke the cross poses the ultimate religious question, which throughout his life Jesus had witnessed to!

“Can the last power of life be gracious if this man is crucified?”

Was the joyous confidence which characterized Jesus merely whistling in the dark? 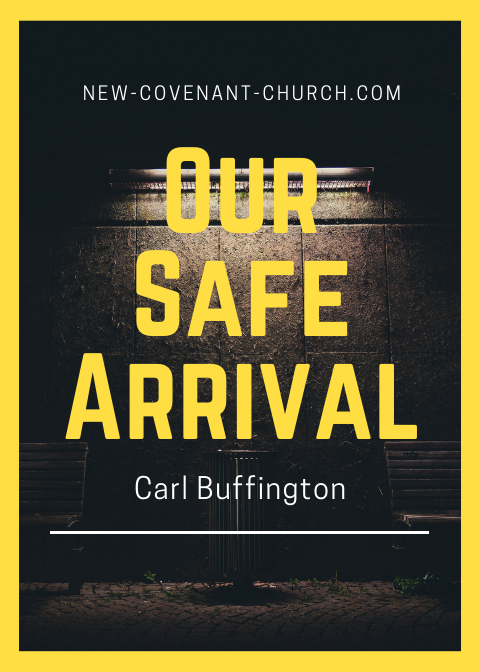 Was he wrong?  Does the sparrow fall and no one cares?  Are the hairs of our heads left uncounted?  What manner of love allows this? Pilate dies in his bed and Jesus is nailed to the wood?

“If you are the Son of God, come down from the cross” is not only the taunt of the high priest but the deepest question of the disciples.

“Perplexed, wondering, and frightened,” are words used in the 24th chapter of Luke’s gospel to describe how the women felt who went to the tomb early that first Easter morning. The women were going there to finish the burial of a corpse, not encounter an empty tomb. 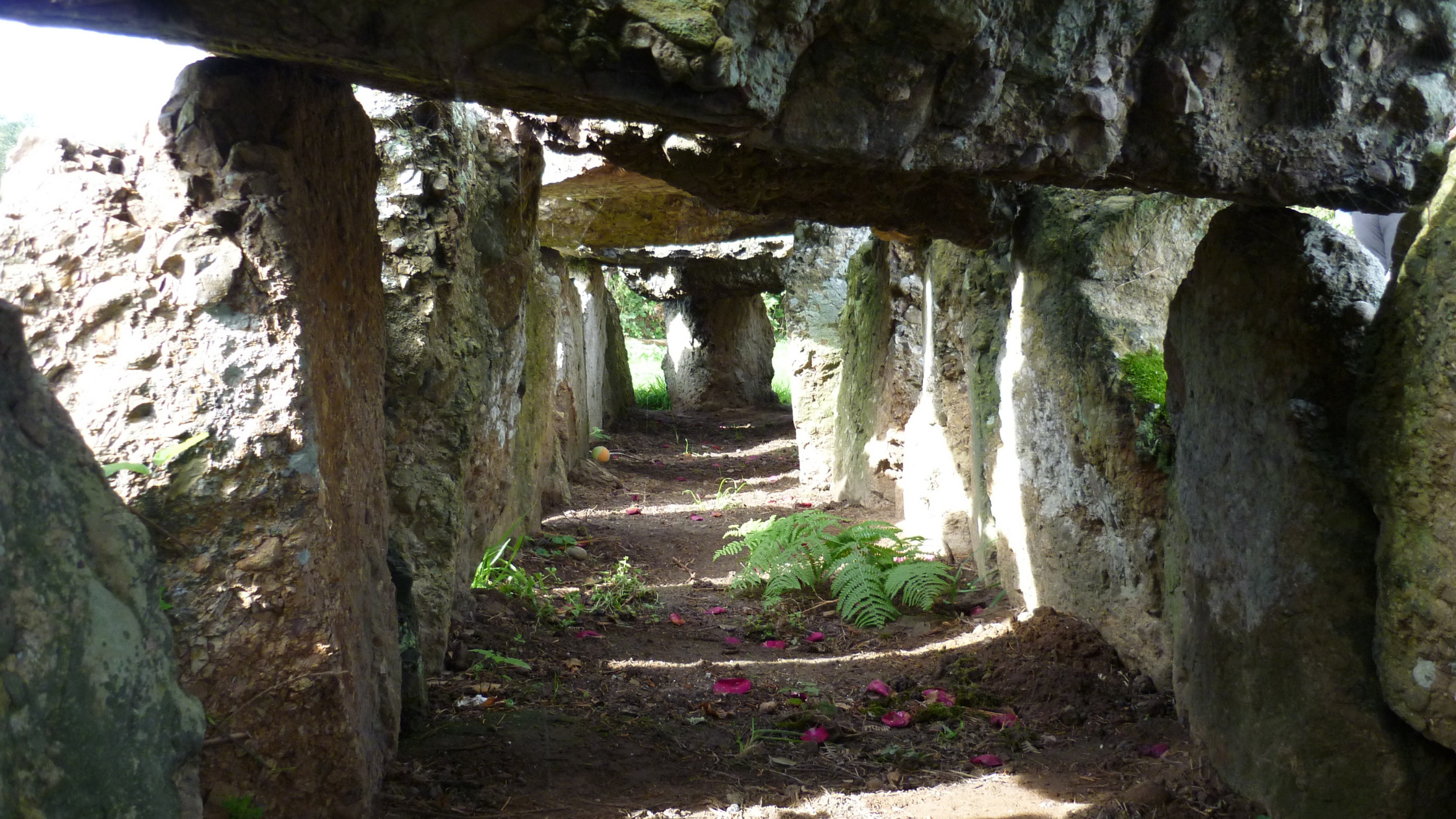 “Nonsense,” an idle tale, and “not believing” are words used by, and of, the 11 disciples.  And it says Peter looked into the tomb and “wondered.”

They hadn’t listened carefully to, or heard, what Jesus said on more than occasion:

“The Son of Man must suffer many things and be rejected by the elders, chief priests and teachers of the law, and he must be killed and on the third day be raised to life.”

But, you see, this wasn’t their idea of resurrection.  They were perplexed for sure. As astonishment and confusion filled that morning’s air, it made room for fear and terror.  It was a foreign idea for them.  Maybe for us as well?

For them resurrection was something at the end of time, a group event–not one individual traversing through death and coming out the other side–a very same and yet very different person.

Yet, they would soon meet, see, touch, and eat with Jesus, but even then no one was slapping him on the back and saying, “So glad to have you back J.”

And that’s what turned them around and upside down you could say:  Encountering the living Jesus.  That’s where resurrection living is birthed!

Jesus was the same and yet very different. Now he is walking through walls as well as time and space.  At the close of the gospel the disciples are not perplexed, terrified, saying ‘nonsense’ and being unbelieving, it says:

“Then they worshiped him and returned to Jerusalem with great joy.  And they stayed continually at the temple, praising God.”

Which Is Worse: No Voice or No Wish?

In our small Zoom group this week someone shared, “God didn’t promise us easy road, just a safe arrival.”   But what a promise!

The demonic powers of the world and our own terrifying evil will not win the day.  Our brother Jesus has broken their hold, not with dragon slaying strength, but by living the love of God amid the ambiguities of existence.  Joy, freedom, even frivolity would now be the mark of their lives and of their ministry:

“With shrieks, evil spirits came out of many, and many paralytics and cripples were healed.  So there was great joy in that city.”  Acts 8:7-8

An ancient custom of the Greek Orthodox Church reserves the day after Easter for laughter and hilarity.  On this day they celebrate the cosmic joke God pulled on Satan in the resurrection. 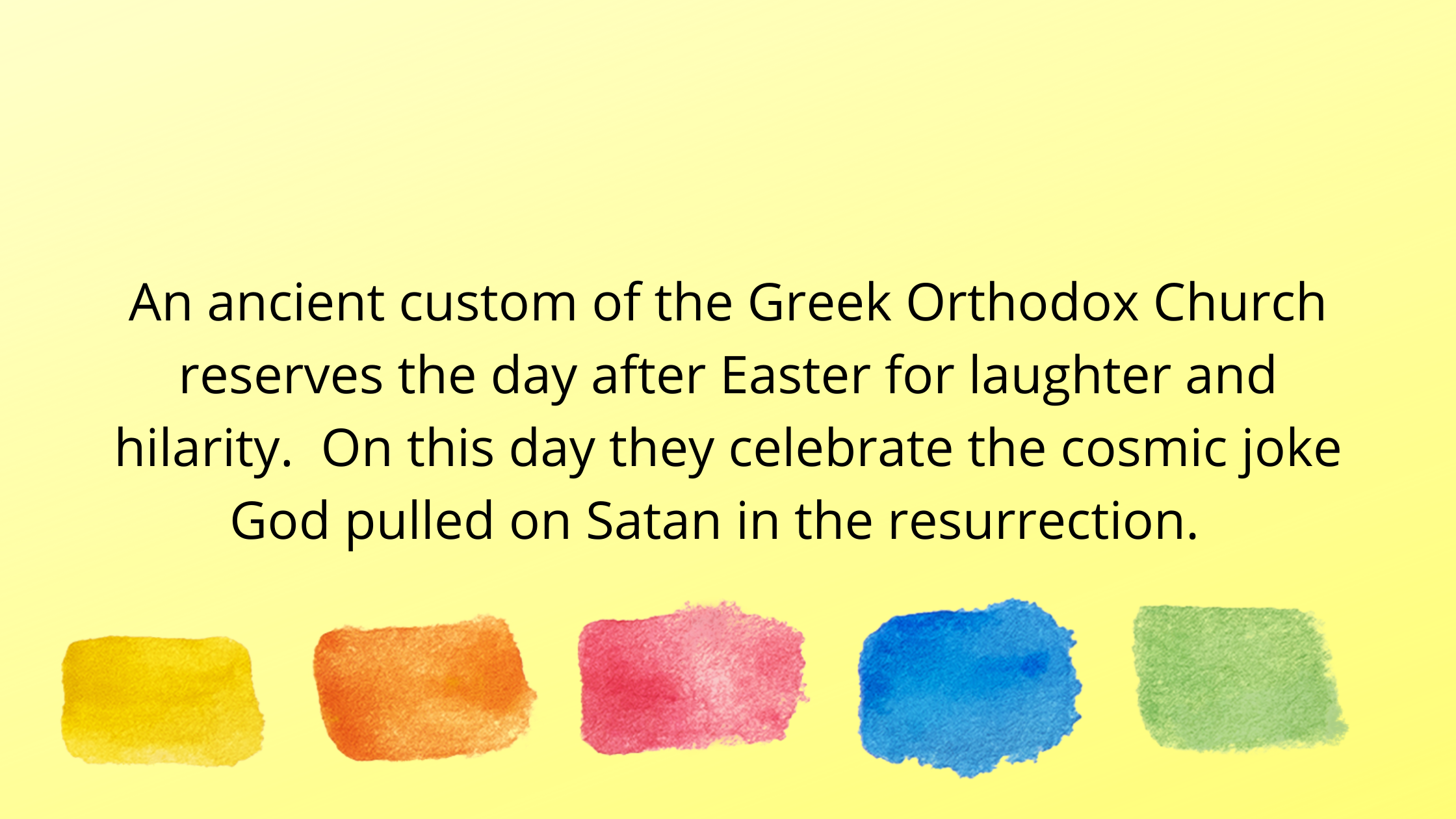 The ambiance of heaven is celebration, and our God rejoices over us with dancing according to Zephaniah, and according to Ephesians we are to reflect the God we worship.

The great preacher W.E. Sangster he had a disease that caused his muscles to atrophy.  Towards the end of his life all his muscles were useless but he could write with his right hand.  His wife recorded this one Easter a.m. “On Easter Day he wrote to me:

"It is terrible to wake up on Easter morning and have no voice with which to shout, 'He is risen!' But it would be still more terrible to have a voice and not want to shout ‘He is risen!”

Winning the Lottery Is Something Less Than Nothing

We tend to get excited about things like winning the lottery let’s say, and it’s understandable, but that is something less than nothing compared to this event and the impact resurrection has on our eternal destiny, our safe arrival! 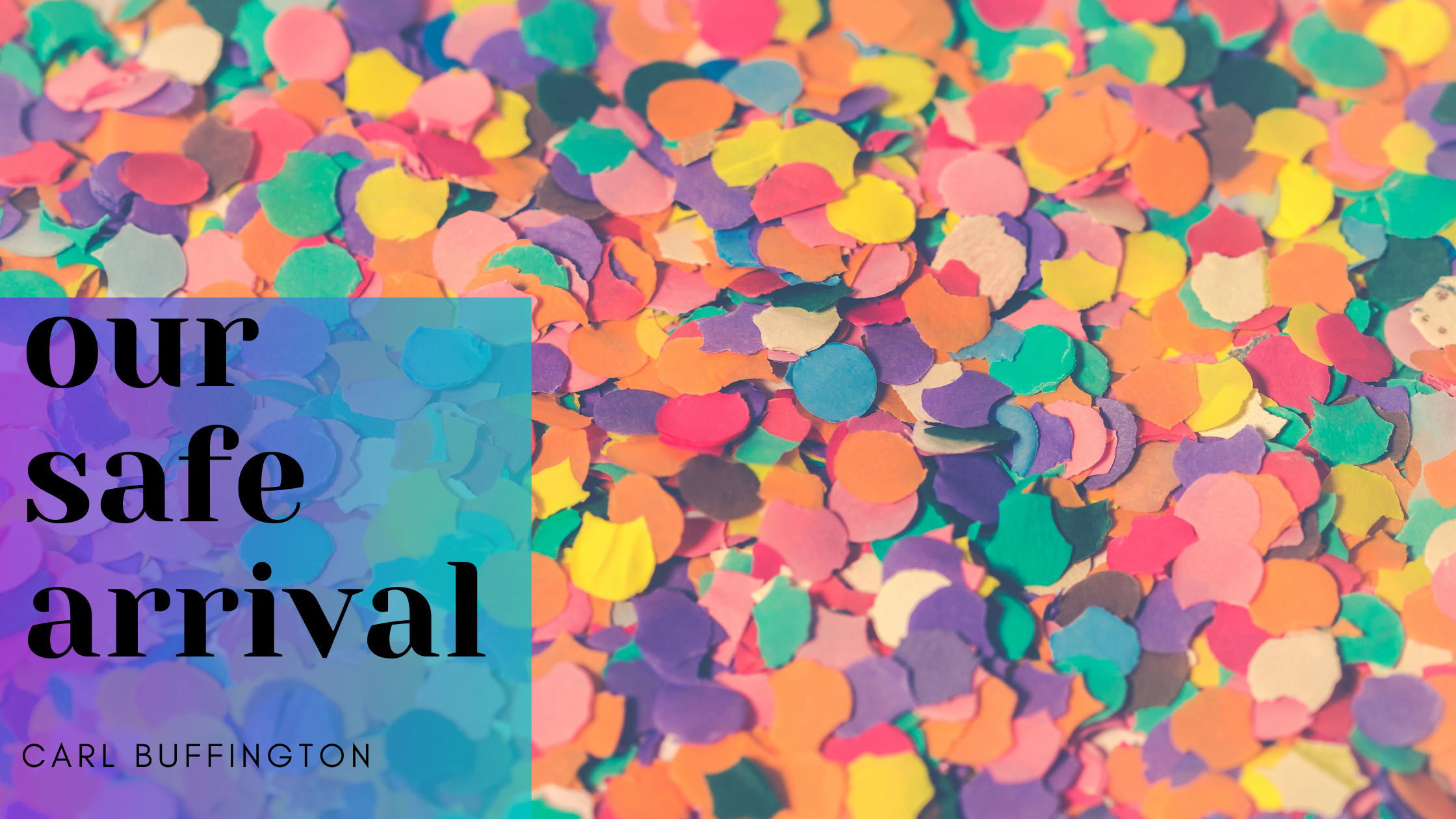 The one is for this world only; you know that we leave our winnings behind, as they say ‘there are no pockets in a shroud.’  The other is an inheritance of eternal life, something waiting for us that really does last forever.  Which do we want to invest in?  Spend our life for?  The ‘Good life’ or ‘Resurrection life’?  Choose this day!

There is no better news than resurrection life!  It seems to me that it should be more evident in our lives than it usually is.

Why We Don't Celebrate

We have reason to celebrate as he says, and yet… so often we don’t.

We’re not particularly joyful and we should be peculiarly joyful!  Easter is here!  Our brother Jesus has broken their hold, not with dragon slaying strength, but by living the love of God amid the ambiguities of life.

If we are not perplexed, and terrified, what are we?

Do we not understand what has happened 2000 years ago?  Has resurrection become old hat, a foreign concept?  Just another vocabulary word in our Christian jargon? 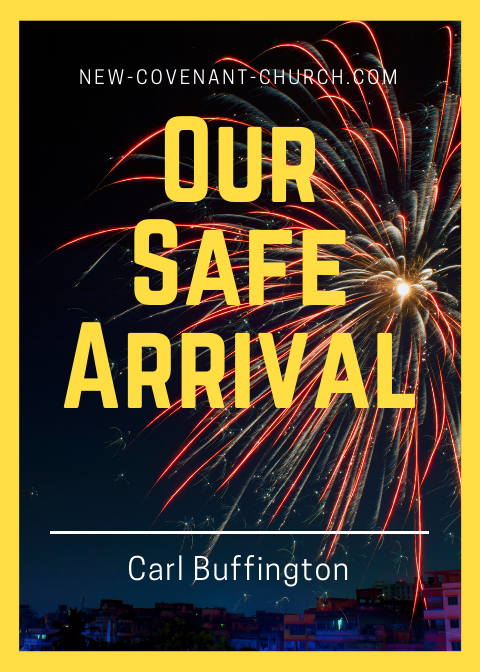 I doubt it is that to our God!  It entailed suffering the likes of which you and I really have no idea about!  One person I read has observed that part of Jesus suffering was the birth pains of new creation.  He was giving birth to a new creation, resurrection life.

One of the Symptoms

And the sad thing is, reading the story of people like Sangster shows us, resurrection life begins in the here and now not just the there and then, and we don’t seem to know it.  One of the symptoms that we are infected with it is the contagious joy that spills out of us.

The disciples went from hiding cowardly to fearless and bold.  This became one of the strongest proofs/evidences of the resurrection, the dramatically changed lives of the disciples, and is to this day evidence that he lives!   It was our new life, resurrected life. 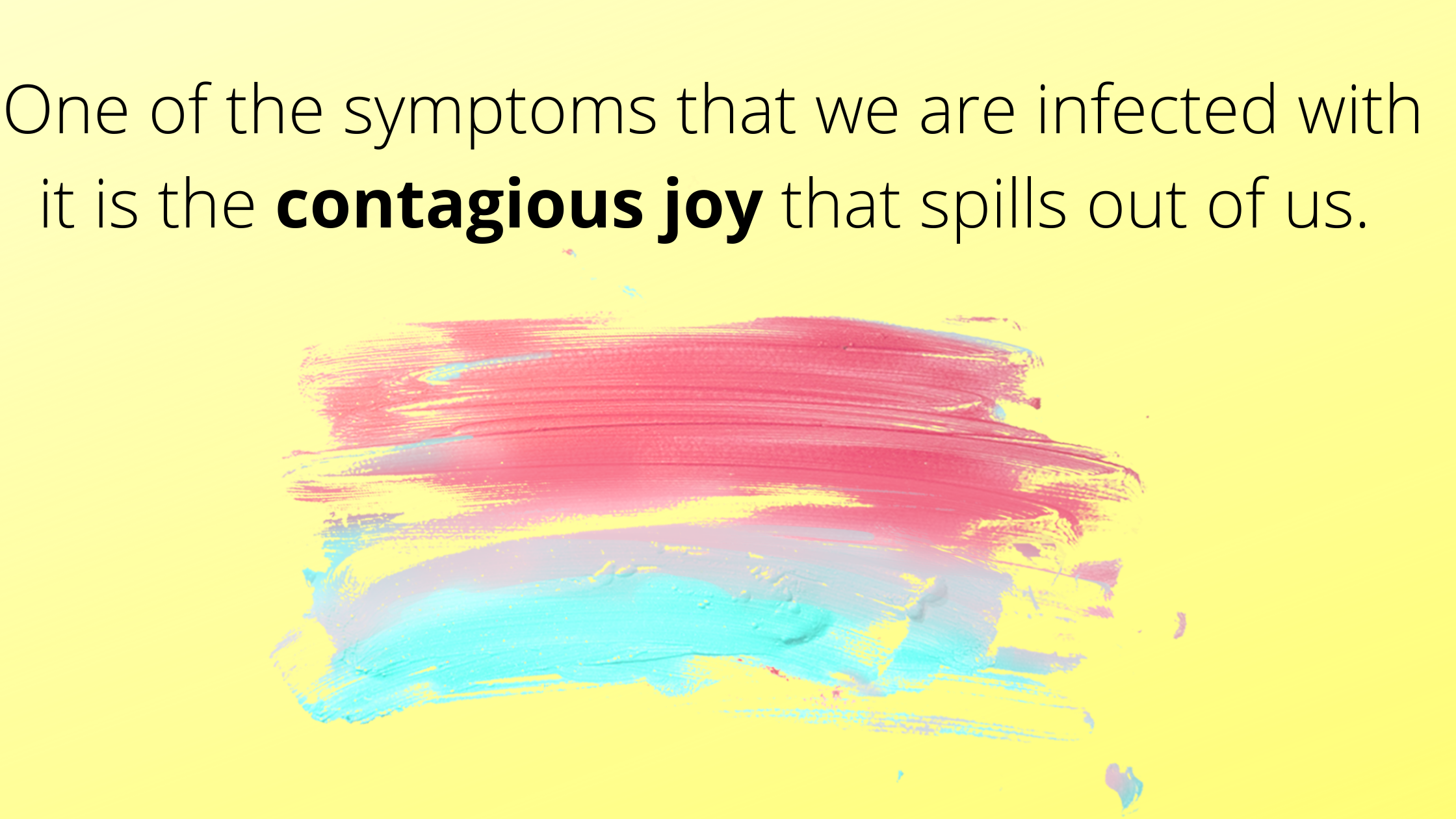 What turned it around?  What produced this indomitable joy and relentless boldness and courage?  It was an encounter with Jesus as I mentioned.

How does that happen?

Raymond Brown, New Testament scholar reduces it to this:

“How did the following of Jesus which involved love for him survive after he died?  The answer, I suggest, is that it survived only because love for Jesus was looked on as an on-going element, even among those who never knew him during his ministry… And so one can make a case that a loving relationship with Jesus, which was part of the following of Jesus in his lifetime, remains an intrinsic necessity in the church.”

He Had Come Looking for Her

In John’s resurrection narrative, Mary goes to the tomb looking for Jesus, not expecting to find the living Lord–Maybe like us this Easter?  She and the other women surely loved Jesus, but they weren’t expecting to find what they found, or didn’t find.  She thought she was talking to the gardener. 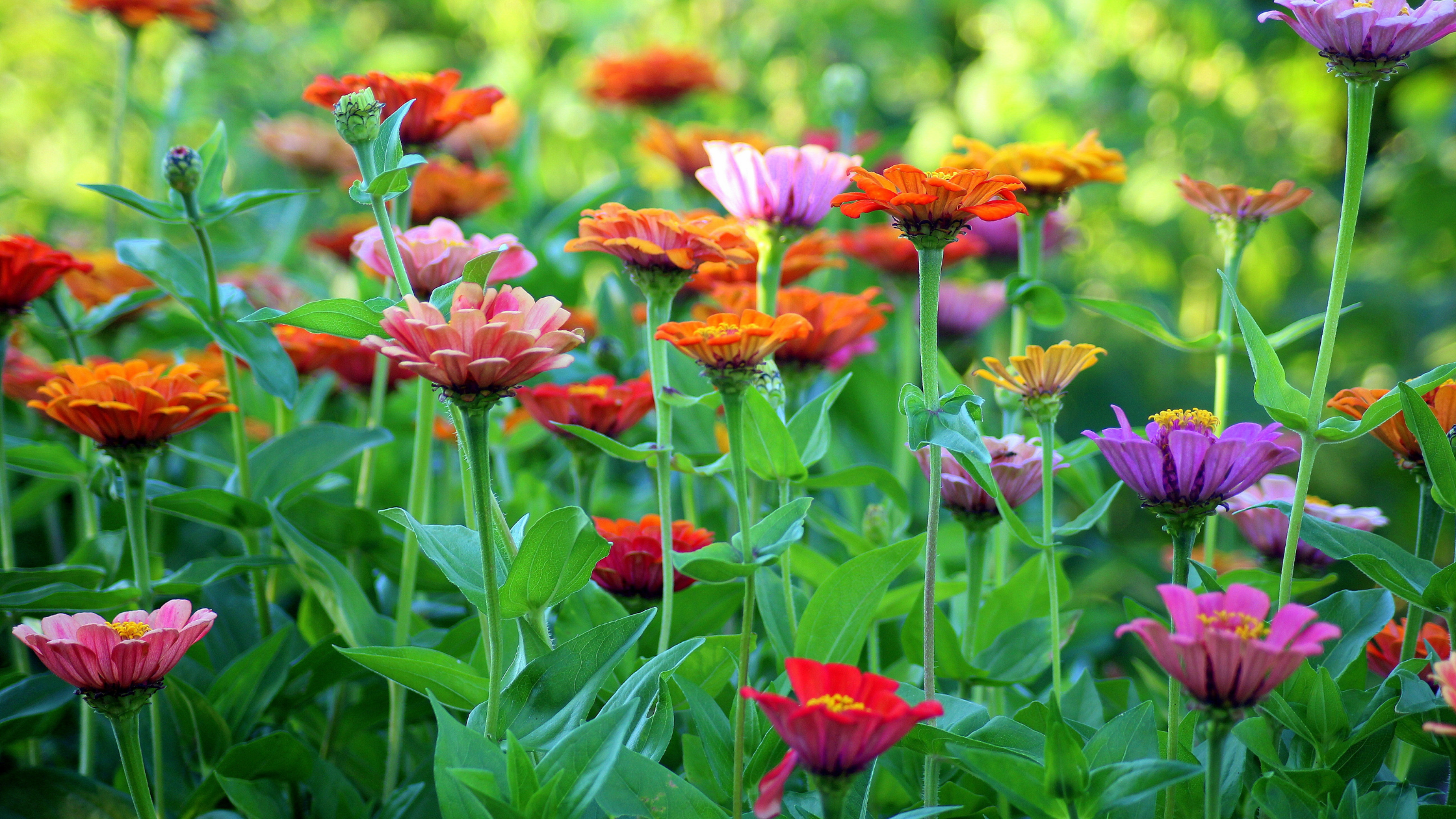 And then in one of the most touching scenes in scripture Jesus just says just one word, mind you, this is the Word of God about to speak, who when he said “light,” light was. The one of whom Peter said,

“…you have the words of eternal life.”

And now he’s about to speak to a dear friend, and the word he speaks is simply her name, “Mary.”

But it’s more than enough to restore hope, to invite her into his new creation.

She spins around and “Rabboni!”  leaps out of her mouth as she embraces him in a hug felt round heaven and earth for those watching. Mary discovered the most startling truth of all when she came looking for the body of Jesus.

She did not realize that the person she had found was the One who had risen and that he had come looking for her.

Be Still and See His Salvation

Moses told God’s people to “be still and see the salvation of our Lord.”  Perhaps that’s a good idea for us this Easter, even if the road is rocky, be still, and perhaps you will hear him call your name, he promised he would.  He knows them all!

Then joy, even frivolity, will fill your heart, and that is the salvation of our Lord!

Read more from Carl in How to Embrace Every Moment.

Listen to Carl's message "What Happened at the Cross?"

What are your thoughts or questions about the promise of a safe arrival?  Let Carl know below!