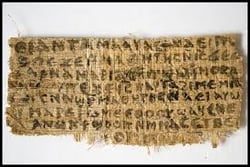 Luke knew how to make a story come alive.

First, start with truth. As they say, "Truth is stranger than fiction." Truth is compelling because it lays so closely to reality.

No unseemly gaps created by imagination or evasion. Luke is committed to giving Theo a reliable account. This includes the complications of drama, resistance, betrayal, confused friends and ambivalent responses. But plot is often driven by conflict, and conflict makes the world go round. Luke's gospel story begins and ends with the whole world in view.

Second, continue with character. Not only characters, people with virtues and vices, agendas and memories. But character. A moment of noticing how someone responds under pressure. A recollection of what someone says when asked what they want. A response that reveals what is uniquely and universally true about people like them (and us). A revelation of the deeds and souls of the people being described. Primarily, the revelation of the character and Character of Jesus.

Third, move towards what matters. Luke tells Theo that he wants his faith to be confirmed. Established and secured. That means that Luke is gathering his resources, both historical and rhetorical to make a passionate appeal for us to not only see Jesus Christ, but to love and follow him. Jesus had to get to Jerusalem, and he must suffer and die before the glory promised to him would be achieved. Peripheral issues, interesting as they might be, had to be left aside for the sake of this great quest. His followers learn, slowly but intentionally, to do so as well. (As we will see in Volume 2: Acts)

As we have been reading this summer, Luke gives us a compelling portrait of Jesus and of the world he came to save.

We are collecting stories of Luke's impact on you. One way to share is through our Open Casting plan. Tell us a character from Luke's gospel that stands out to you, and why.  Then, tell us who you would cast to play that character in a film. We will do the rest. Other opportunities are still to come. Send your selections to me at christopher@new-covenant-church.com

The strategy of Luke works well for our own stories as well. The three steps listed here give us an opportunity to live in a world:

1) far richer than imagination,
2) far truer than hypocrisy can pretend, and
3) far more significant than distraction can secure.

Find yourself in Luke's gospel, on some page or other, and then pay attention as someone in the story moves towards you. To begin, imagine being a sibling in our Sunday gospel. You can read about them in Luke 12:13.

Someone in the crowd said to him, "Teacher, tell my brother to divide the family inheritance with me."

Pick the one you identify with most, or least. We will look at Jesus' response together on Sunday.